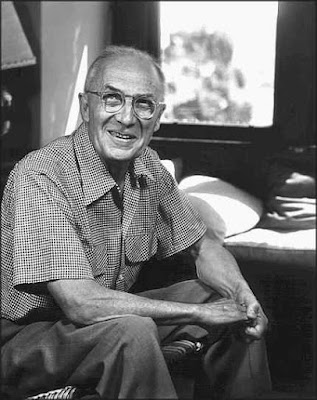 I  my love for adjectives, metaphors and unhinged diction when I was a younger man attempt to write in the shadow of the Eliots, the Ashberys, the Stevens of the poetry world. Needless to say (but to be said anyway) I wrote a great deal of poems that could be blue penciled into submission, as many, many of the things I composed were done on the fly, in full improvisational rant. Most of us are lucky enough to survive and learn from their youthful indulgence, and my preference in tone , for my work, is to more concise, terser , more direct in my treatment of the world. It's an ongoing experiment in phenomenological terrorism, but we can conclude that my later offerings seeks to get back to the data, the situation under a poem's consideration. One longs for something to come from their keyboard that's less abstract and more at one with the material realm, a project destined to fail--one cannot step outside their own skin to observe oneself in their habitual habitat--but it is the attempts that are worth considering, pondering, it is the art that adds to our knowledge of the things we don't know. For others, of course, poetry is a means to classify and categorize and index people, places and things; it is a means to conquer the world and reduce to quantifiable data. Poetry here is means of missing the point entirely.

Sadness. The moist gray shawls of drifting sea-fog,
Salting scrub pine, drenching the cranberry bogs,
Erasing all but foreground, making a ghost
Of anyone who walks softly away;
And the faint, penitent psalmody of the ocean.

One needs to admit to Anthony Hecht's mastery of the carefully articulated tone of his work , and appreciate as well the limits he observes when constructing correlatives between interior states with the material world. Not pompous, not grandiloquent, not bombastic, Hecht's poem "Despair" finds a way to make the sluggishness of the human spirit resemble the turns of the day--

Gloom. It appears among the winter mountains
On rainy days. Or the tiled walls of the subway
In caged and aging light, in the steel scream
And echoing vault of the departing train,
The vacant platform, the yellow destitute silence.

The adjectives are perfectly selected and fitted like the smaller, finer diamonds in a larger arrangement of vaguely tarnished gems, with the intent being to remind you, I suspect, that more often than not one has found themselves caught unaware that the warm afternoon has taken on a sudden chill in just the minutes it took for the sun to take a late afternoon shift of position. It does just that, but it seems a bit false; the perception seems padded by the slightest degree.

But despair is another matter. Midafternoon
Washes the worn bank of a dry arroyo,
Its ocher crevices, unrelieved rusts,
Where a startled lizard pauses, nervous, exposed
To the full glare of relentless marigold sunshine.

What I recognize over anything else is a world that seems to exist only for it's elements--an Edward Hopper universe of subdued tones, melancholic hues and diffuse light-- to illustrate a mood that itself seems more imagined, fanciful. The language eschews the chance to be vivid and naked with the sadness it attempts to corral and instead decorates the psychology. Phrases like "Washes the bank of a dry arroyo" or "To the full glare of relentless marigold sunshine" , for me, hang there like waiting room art that is nebulous and comforting; the real experience is abstracted, obscured, defused of potential. This makes me think less of an accounting of what one has felt and found suitable expression for than it is a rumor of something having happened . This is the kind of language one comes upon with someone who has something on their mind they aren't comfortable exposing to an honest art. Measured, well crafted, balanced, similes and metaphors synchronized , but without a single provocative notion. You're left to admire the structure of the thing, the finesse of the inner mechanisms, and leave the poem without a hint of real feeling.
________________
The conventional wisdom is the older artist uses bolder strokes and is more selective in the techniques they use from their assembled devices and acquired skills, and appealing prospect for older poets and readers who surfeited with the orgy of earnest self examination. Enough about you, already, we know it's you who's had these experiences, tell us what you see without announcing that you're in the act of seeing. I don't constantly roll my eyes when coming across a personal pronoun in a poem--that would be rude, even in private--and I will attest to liking poets who've a winning manner that mitigates their constancy in the work; I am a Norman Mailer fan, after all. But not everyone is so engaging, nor interesting, at least when they are the articulated persona the poetry is coming through. Much of the time you desire the more direct approach; let's skip the foreplay and go straight to the perception, the place where the new idea forms. My model is William Carlos Williams, who could, to my mind (and ear) draw a lyric from the barest of linguistic ploys. It's a clean, well lit poem.

Spring and All
by William Carlos Williams
By the road to the contagious hospital
under the surge of the blue
mottled clouds driven from the
northeast-a cold wind. Beyond, the
waste of broad, muddy fields
brown with dried weeds, standing and fallen
patches of standing water
the scattering of tall trees
All along the road the reddish
purplish, forked, upstanding, twiggy
stuff of bushes and small trees
with dead, brown leaves under them
leafless vines-
Lifeless in appearance, sluggish
dazed spring approaches-
They enter the new world naked,
cold, uncertain of all
save that they enter. All about them
the cold, familiar wind-
Now the grass, tomorrow
the stiff curl of wild carrot leaf
One by one objects are defined-
It quickens: clarity, outline of leaf
But now the stark dignity of entrance-
Still, the profound
change has come upon them: rooted, they
grip down and begin to awaken.

There seems less of the telling-the-world-what-it-mean??s I gather from Hecht's skilled outline and sense in Williams someone who has remained quiet and still long enough in the spaces he inhabits to have the world reveal itself. This poem is one of action, so to speak, activity, of how nature exudes and recedes with the change of the weather, how the terrain seems to wither under a severity of cold wind and hard snow but comes to life again as the ground softens and the temperature warms a bitter air. Where Hecht, to me, reads as if he was determined to find dour inner states, Williams finds symmetry and elegance in what the passerby might consider a rough and unrefined wood; Williams' eye is sure and his ear is tuned to the music that's already in the frame he wandered into ; there was no need to busy up his materials. Being the doctor, Williams had, perhaps, an innate appreciation of how things fit together, whether the human body, the buildings of a city that hugged a rough shoreline, or otherwise untrammeled nature itself. He is wholly aware that what he's seeing is already perfect before he arrived; the perfection is independent of his personality and his desires, and there his presence does not bring beauty to the landscape. It is his task to notice what's there , to see what is in front of him that otherwise goes unseen, to notice the world apart from his ego. That is what makes Williams one of my favorite poets.
at June 05, 2009