There was an interesting piece at Slate in 2006 about the auteur theory in film criticism
with regard as to whether film directors and screenwriters can both be given credit
for being the central creators of an especially great movie. Read that piece here and be prepared for a cogent lesson in the history of movie reviewing. I think the theory is useful, but that it ought to be considered sparingly: it'Sis useful as a particular aspect of film criticism and reviewing, but it is a notion that we are better off retiring altogether. The problem with the idea 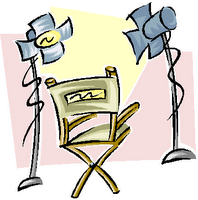 is that a generation of film critics spent their time generating convolutions about directors and their reputations , using the auteur-ism as the main filter, rather than actually assessing the films that were being made. What we wound up with was little about individual films and much about puffed up reputations.The theory , I suspect, has helped ruin a few film maker's product, as in the case of Martin Scorsese. Fascinating as his films are, they are marred by an arty( as opposed to artful)virtuosity that steps out of the frame and instructs the viewer that there's genius and vision being unveiled in front of them. Scorsesee might as well be screaming through a bullhorn about his auteur status. Clint Eastwood, on the other hand, has an easy claim on the term, although he wears his ascendancy to Great Directorhood like it were a loose suit. It shows in the movies he makes, I think. There is great talent here as opposed to self-declared genius, which is to say that Eastwood uses his filmmaker skills to serve a story, not pad his resume.

I've thought for years that the auteur theory was useful mostly to fan boys who wanted a means to turn their film hero obsessions into matters of serious study, thereby providing them with a reason to discourse as matter of professional dispatch about their teenage enthusiasm. The same has happened to rock criticism, and continues as popular arts chatter mimics the tonier rhetoric of literary and theater criticism.Everyone, given a theory to match their preferred diversion, gets to be a know it all. It beats learning a trade, I suppose.

A pesky item in the concept is the advance of reputation over the quality of specific work. Dozens of second, third and fourth rate directors whose films exhibit the tendencies a nominal auteur must have, such as a readily identifiable camera style that accents and enhances a director's personalized view of the world. Jack Webb, creator and star of Dragnet, wrote and directed films that transported the cue-card realism of the television show to the wider screen, "30", "The DA", "Pete Kelly's Blues" among them. The style is very distinct, the writing stands out from anything else in the field, the world view, basically post-Hemingway misery about loners abiding by a code without which the planet descends into slow chaos, bespeaks the traits the auteur critics consider as graces.

Yet there's a reason Webb's films only see an infrequent screening on AMC or one of the Turner stations while Howard Hawks or John Ford are shown repeatedly; Webb's films are fascinating for their stiff professionalism, but are in plain fact dull and dulling.Just imagine Dragnet's basic flat line style transposed to newspaper offices, a Marine base, or a jazz band, with the storyline stretched to feature film length, and you can imagine something so trudging and
cement shod that you might mistake it for Brecht . Hawks and Ford, or others one can name, easily break out of the specialized auteur ghetto and aren't afraid to entertain the senses. Auteurism's particular limit is the failure of the proponents that not all film makers are worth the same amount of enthusiastic ink.
at October 23, 2009