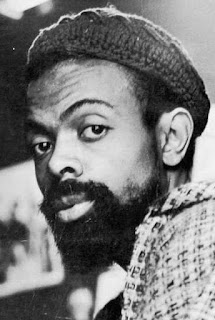 Amiri Baraka, nee  LeRoi Jones, is a primary influence in my decision to be a poet; his earlier works were an odd and rhythmic mix of black speech, violent surrealism and slow-burning rage that would erupt, sure enough, into a vicious pyrotechnical beauty. It was the perfect voice for a white kid living in Detroit who was growing up surrounded by Motown, free-jazz saxophone improvisation and the MC5. Something more severe and actual had to supplant to Dylan's scintillating but apolitical surrealism or the  West Coast counter culture's belief in a spontaneous Utopia. Jones could set dual-isms against each other, reveal the clashes of political hegemony and emasculation, reach into the tradition of blues and jazz and reveal the music and the accompanying vernacular as idioms, political and spiritual, that black Americans needed to love and harness as  an expression of what made them uniquely American and permanently Other.

His vision was the surface of the barriers black men came up against, social and psychic, his poetry was the conversion of his anger into a stylized voice that could improvise perception and strip away cracking veneers on institutionalized lies. He had his problems, yes, but he was an impressive force, a majestic presence of the lyric and the abrasive. Anomie was the key element here that got me, the crushing self-consciousness that one's life measures up to exactly nothing and that suicide were a perfectly sane answer. Jones, always angry, was indebted to Franz Fanon's text The Wretched of the Earth, arguing (in a cramped nutshell) about the psychological effects of the colonization of their cultures. Fanon didn't argue for suicide as a solution but rather supported liberation movements across the globe to overturn the oppression. Jones is taken with the notion of one being made to feel listless and without worth sans real evidence--the source of the decrepit psychology comes from without, not within, he would later argue--and here isolates the malaise in snapshots, images, everyday activities that become brittle and poorly constructed. He feels enfeebled, quite unable to change his circumstances. Jones would evolve into Amiri Baraka as he broke with the Beats and embraced various forms of Black Nationalism, writing poems and plays and essays that were deliberately problematic for white critics--he refused to be defined and contained by a white culture's linguistic agenda. But he did write some brutally beautiful and stark poems early on, and this is one of them.


Lately, I've become accustomed to the way
The ground opens up and envelops me
Each time I go out to walk the dog.
Or the broad-edged silly music the win
Makes when I run for the bus...

Things have come to that.

And then last night, I tiptoed up
To my daughter's room and heard her
Talking to someone, and when I opened
The door, there was no one there...
Only she on her knees, peeking into

Her own clasped hands.

Nicely phrased here, a wonderful inversion of a horrible cliche: And now, each night I count the stars,/ And each night I get the same number/And when they will not come to be counted,/I count the holes they leave.  What would make us normally expect the poet to finally declare his awe at the thought that the infinitude of the cosmos makes his woes trivial in perspective, Jones' narrator counts only what's missing. The stars are not far-flung suns with their own solar systems and probably life forms on many of them. The light is instead of being an invading illumination seeping through pinpricks in a tarp that covers this man's sense of himself in the world. Everywhere he looks he sees only more things missing. We read this and marvel at Jones' skill at bringing a lyric beauty from such an accumulated woe, but we remember as we read on that the white culture's tradition of depressed and suicidal romanticism was soon to be renounced by the emergent persona form of Amiri Barka, who would deny the death culture and turn his despair into a motivating anger. Think about how you will, but he is a poet who acted to get out his funk, to counteract the thinking that was killing him.