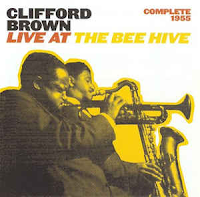 Live at the Beehive is a wild and wooly document of the excitement of the jam session. Recorded in a Chicago bar in 1955, the audio quality  is not the best, as the sound is muddy and flat, there's an excess of surface noise, and the continual buzz of customers ordering drinks and talking through the best solo moments are sn annoyance. The music from the bandstand easily overcomes and transcends the grouchy ambience. The collective sound is lively, rambunctious and packs the punch of a chain-mail glove.The several extended forays of the late Clifford Brown are especially exciting. Before his sudden death, Brown had established himself as possibly the premier trumpet player on any jazz scene, and this record, especially the workout on Sonny Stitt's "Cherokee," reminds us of his incandescent powers as a soloist. Clifford possessed a big, fat sound, and was alternately lyrically sublime and frenetically rapid in his choice of note. Bee Hive is a handy display case of this man's brilliance. The other players hold their own as well. The searing sax work 'of Sonny Rollins and Nicky Hill, the shimmering guitar of Lou Blevins and the pulsating time kept by pianist Billy Wallace and drummer Max Roach is featured. Audio quality is ragged, which is to  be expected, but these things are remedied and the music proceeds, quickly regain momentum. Live at the Bee Hive exists as an example of superb musicians just flat-out playing their  hearts out.
at January 31, 2021 No comments: 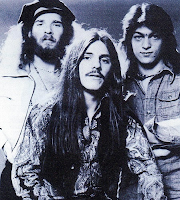 The story goes that a young Frank Marino freaked out on bad acid some years ago. After being given a guitar by his doctors as part of his recovery therapy, he was soon playing exactly like the deceased Jimi Hendrix even though he had previously never touched the instrument. Marino said in early interviews that he believed the spirit of Jimi had entered him during his recovery and that he had been changed from being just another teenage doper into someone who would carry on what Hendrix had begun. So the story goes. What you can say about Marino, whether you swallow' that crock or not, is that he does sound like Hendrix. But instead of "carrying on" the guitar stylistics and advancing the art of electric guitar, Marino's playing is somewhere in the late 60s, fast and furious, full of echo, feedback, and, unlike Hendrix's occasional moments of bluesy lyricism, utterly graceless. The problem is singular: Marino and Mahagony Rush are incapable of writing a decent riff, a failing that results in Marino ejaculating pud-pounding solos over the material like a meat and potatoes slob drowning the most expensive plate at the Top Of The Cove in a comeuppance of ketchup. Although one has to concede Marino's adeptness, his style becomes wearisome. In the end, What's Next, their newest record seems aimed at the audience who've turned Hendrix into a deity and refused to admit that better guitarists have come along. 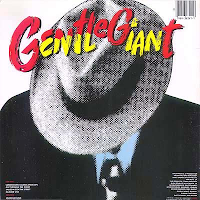 Back in the days when classically-derived rock was all the rage among the small enclaves of pop dilettantes, Gentle Giant set themselves apart from the pack with the unusual continuity and rigid formalism. Their playing. In recent years, though, Giant has been changing their sound, gearing it toward a more commercial appeal so that they might attract a larger audience who might otherwise dismiss them as mere technical tricksters.- Unfortunately, what they sound like on Civilian, their latest record, is merely a watered-down rendition of their old self, bordering almost on self-parody. "The material stays safely within the limits of what the average tolerate - there is little risk-taking here - and except for some pleasant ensemble bits here and there, nothing really gels moving. Also, Derek Shulman's singing - a distraught, emasculated whine - has never been my idea of great crooning, and the lyrics, trapped in the apriori existential murk of alienation and all, amount to nothing more than in articulated pout. Words such as these are enough to make one want to give the linger, incessantly mewling about a world he didn't ask to be born into, a good swift kick in the pants. And not necessarily in the seat. 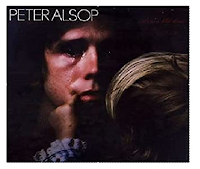 If this were 1967, an anti·-war or Civil Rights march, and if I were 17, 'dad in khaki, stoned beyond what's reasonable in public, and still believing we could have world peace through the right mixture of drugs and indiscriminate sex, I would think that folkie Peter Alsop . was a totally bitchen guy. But this is 1980, and though my politics haven't changed all that much, I think most of us learned the lesson that the world won't be a better place through wishful thinking and pamphlet politics. Alsop , though, seems to exist quite happily in an airless vacuum . He 's what used to be called a "topical" songwriter, and though the things he chooses to sing about - the innate greed principal of capitalism, the principle of nuclear energy,  labor songs, feminisms' liberation of males from the breadwinner role - you find him to be so politically "correct" that you'd like to punch him out. Not that I find anything particularly disagreeable with Alsop's worldview. Alsop gets on my nerves because of his expression, which is didactically self-righteous, shallow, and humorous to only an audience of like-minded politico who already knows the punchlines. And as a propagandist, he lacks the needed ability to turn up with the stirring turn of phrase. This man is not Phil Ochs, Dylan, Dave Van Ronk, or Buffy St. Marie. He is Peter Alsop, an insufferable little snit, a profoundly depressing experience. What else can you expect from a man who probably won't play in any state that hasn't ratified the ERA?

(Originally in The UCSD Daily Guardian)

PHIL SPECTOR IS DEAD AND SO IS LANA CLARKSON

There will be posthumous praise enough for the brilliant but entirely problematic Phil Spector, who recently croaked of Covid complications. He made magic, he changed the way hits were made, the whole shot . Not that anyone's forgetting that he died as a convicted murderer responsible for the death of Lana Clarkson in 2003. That he was alcoholic, a gun nut and a severely paranoid were well known Spector attributes, a bad combination everyone seemed aware of. It seemed inevitable that something as tragic as the death of Clarkson would happen sooner or later. So lets consider the intersection between one's art and how that art is informed by intractable social attitudes . This 1962 song, HE HIT ME (It Felt Like a Kiss), recorded by The Crystals, written by Gerry Goffin and Carole King and produced by Spector , is the recitative of a teen girl telling the tale of being "untrue" to steady beau by kissing another boy, and that the young cuckhold hit her. "He hit me", the chorus goes, " It felt like a kiss", an efficient and disturbing encapsulation of a battered woman's mind set that the blow was a profession of love . 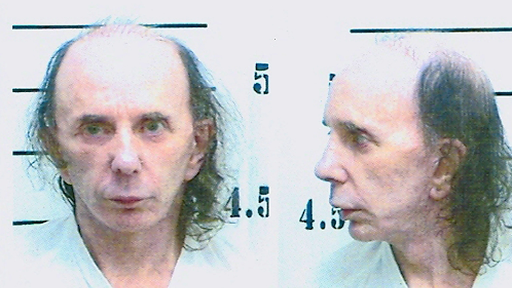 The victim internalizes the blame infers that she deserved to be punched. Yes, Spector didn't write the song and a more exacting examination is due Spector, guns and violence against women as a matter of course, but it's interesting that his production of a song that makes hitting women a natural consequence of a woman betraying the needs of a male for which the female can only blame herself. Let's remember that this is a pathology and that Spector, along with Goffin and King , perpetuated it, a product toxic to its essentials intended to be sold to an audience that one presumes thinks it's expectable to commit violence as a means of expressing how one feels. 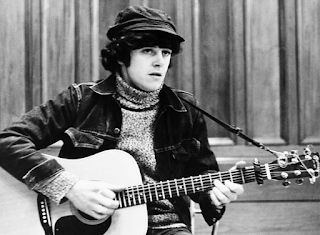