ROCK AND ROLL EVEN THEIR MOTHERS HATED

LIVING IN A GHOST TOWN by The Rolling Stones 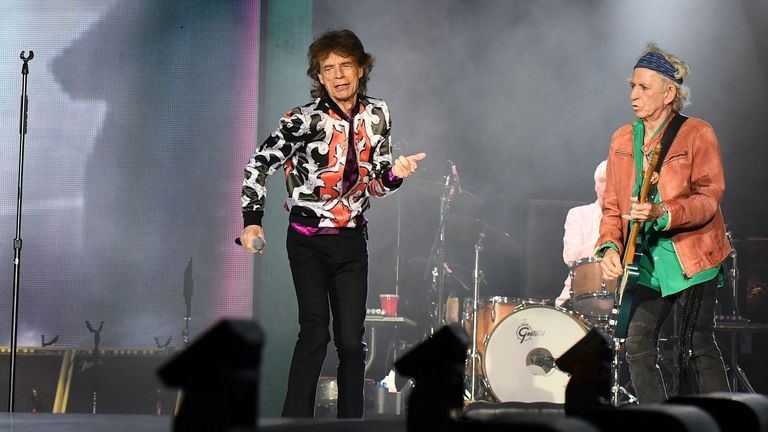 Living in a Ghost Town, the first new music the Stones have released in a decade is certainly news. But it doesn't do much for me. The tune seems like a less inspired 'Waiting for a Friend”--hardly my favorite Stones song--but instead of a spry Sonny Rollins saxophone solo, we get Jagger's harmonica. At this point, it's a bit of a sham for anyone old enough to have known this great band at their height to pretend that Jagger is a musician worth concentrating on. This would have been a great song for Sugar Blue to elevate. It perhaps is fitting and ironic that they produced a topical song that's as empty as the city they're singing about. Should you mistake me for a Stones basher who thinks they are not  just relics of a better past ,  I think the Stones have been one of the very few 60s acts who've managed to continue to make good rock and roll as they've aged and found themselves in the 21st century. A Bigger Bang, their 2005 album and the last full disc of original material, I consider one of the best of that year.  Steel Wheels, Bridges to Babylon and Voodoo Lounge were entertaining and credibly rocking. I have nothing against their age; they are a band of longstanding achievement, and they continue to tour (until recently) because that is what musicians do, perform live. But I have never been a big fan of the band's slower, more "philosophical" tunes--Jagger may be a first-rate wit and world-class cynic with talent for creating a convincing persona to carry a tale, his gentler side has never convinced me of anything other than he's attempting a role he's not cut out for. Jagger is a remarkable vocalist and frontman who’s sold me on a dozen poses he’s proffered over the many decades—droogy punk, bisexual drug addict, street fighting man, serial killer/rapist/ aristocrat/ blues shaman—but the reflective, the contemplative, the softly ironic muse role is something he is not suited for. The actor’s mask suddenly cracks.

MURDER MOST FOUL by Bob Dylan

Murder Most Foul is the best set of stanzas Dylan has written in decades, and  they indeed cover a lot of ground as to where he's been strategically in taking pen to paper, starting off with the kind of burned-out , cracker barrel chattiness that has made much , if not most, of his eighties, nineties and yes, 20s output a slog through the long grass of intensification, but Murder Most Foul rapidly morphs into an the kind of acerbic acuteness that made his late folk and early electric work so damn satisfying. Less fingerprinting, let us say, softer, but there is a compassionate irony here, something found in the third person omniscience of John Cheever and John Updike, something all seeing, interested, sympathetic to unsatisfactory results of best laid plans and the best intention ed art, but resolutely detached all the same, the Kierkegaard God remaining silent and unmoving in the wake of our dire consequences and continued mediocrity, the sort of  irony that contains no message other than pose the question concerning what our next move is.
This song is a welcome, if sadly belated companion to the Phil Ochs masterpiece The Crucifixion, which is among the best rock-poem lyrics ever scribed and which handily beat Dylan at his own rock-poet game; this is prime Dylan, I believe, older, older, wizened and wiser, but a man aware of his own legacy and reputation as an artist who needs to put life into perspective, the ways in which he emerged after the Fall From Grace, meaning the assassination of JFK and the end of the myth of an American Camelot, a sprawling attempt to reconcile what seemed to be promised by the Presence of John F. Kennedy under who's direction a country could transcend the differences that separate us and have us join together in common cause of a creating a more perfect union and the witnessing and not wholly disguised disgust toward the same culture that, in the current climate, is drunk on personal pronouns and the assumption that gross materialism and mythological entitlements come with the words that refer to oneself as the only agent of action that matters.

Dylan's finds himself in a universe crueler, stupider, more self-seeking than when he first started, and finds himself spoken of as deity, philosopher, poet, all manner of seer, sage and prophet who is supposed tell what to do and how to think about a reality does not yield its activities to the dictates to personal whim or the mythology of immutable laws of history. The only law of history is that there is no law of history. The undercurrent in Murder Most Foul's seventeen minute reach is that for Dylan, a man who has been alive long enough to see the major movements of American life, that nothing has changed in terms of what American feels it needs, which is the belief that we as a Nation are number one in the history of all things, that we are a nation of men with unlimited liberty , that self-seeking is a virtue that cures every perceived ailment; we find that the passage of time has changed the fashions , the furniture, the architecture of appearances, but the stupidity remains. This stupidity is not an element that goes deep but rather THE WHOLE THING  we base all we tell ourselves on. Murder most foul is loopy, long, prolix, an overstuffed set of luggage filled with name checks and the like, and likely could have benefited had it been cut to , say, ten minutes, but it is the work of a fine poetic mind that has woken up, or at least discerned a way to discuss what's been brewing in that brain these so many years.
at April 26, 2020 1 comment:

I’m very sad by the passing of John Prine, a wordsmith who  managed the hardest of all lyricist obligations, managing to be plain-spoken, colloquial, unafraid to be Stories would take. His best songs have an authentic, unaffected quality, that of someone talking to about some odd thing that happened them, recent or in the past, setting a scene, establishing an attitude, a personality at the beginning of the story, giving you an idea of where he was going with it all, an idea of what the moral of the tale would be, but then he concludes or at least stops his story at some point you didn't expect.He could be colloquial without being unclear, idiomatic without resorting to cracker barrel cliches; this was someone you knew perhaps not intimately, but who you knew well enough to have an ongoing conversation about the weather, sports, women, bad jobs, celebration and tribulation and come away with a feeling that you had just tapped into a larger Life Force. This writer wasn't, though, a preacher or a saint or an expert, or at least not an expert on anything beyond his experiences and the blessings or consequences of them. He didn't "drop knowledge", he didn't advise, he didn't moralize. He just told you what he knew and admitted what he didn't know and leave you a strong inclination to lean closer and observe longer and perhaps glean some incidental insight as to how to remain teachable after you've learned all the answers. That was a huge part of my attraction to his music and lyrics, their complete lack of pretension .

Prine was less a poet, capital "P" than were some of his contemporaries, than he was story teller, but with the sense of structure of a great short story writer like John Cheever or Raymond Carver. John Prine  was a romantic with good sense of the hard , real ground even the dreamers have to walk.  He was a fatalist who could accept either a good or band hand dealt him by a world that paid his expectations no mind. But wouldn't dive into a murky, sticky self-pity, a critical flaw in many a singer/songwriter's work. Jackson Browne, for example. His music was such that it revealed a well balanced ambivalence to circumstances and outcomes.  He kept a sense of humor, allowed the events of his life to mature into a genuine wisdom. He continued, to pursue his calling.  Prine wasn't  a happy-go-lucky naif, he wasn't cheery when matters hit the skids or if his expectations weren't met.  He acknowledged his feelings, he would pause and rise to his feet after a while and continued on his path. An element of his tales, his loves and heartaches, is this mastery of the  Long-View, the unexpected but welcome shift in perspective that provides what the lesson was of experience , if there was any. Nothing preachy, nothing of the old-man attempt award wisdom drawn from travels and travails. Pine sounded like he was talking to you, in a living room, over lunch, at a bar, over a backyard fence. And, as I said, he had a sense of humor. He has a song called "When I Get to Heaven" from his 2018 record THE TREE OF FORGIVENESS:

This is the greatest of all American literary personas, the knowing hick, the bucolic philosopher, the country ironist, a figure that is from Mark Twain straight up to Richard Brautigan and Kurt Vonnegut, an unlettered man, apparently, with an indefatigable self-confidence and Panglossian who, aware that he is dead and in the clouds with his Creator, shakes His hand and sets out to do what a heaven of his imagining would be, to have his favorite cocktail, smoke copious amounts of cigarettes , stick it to his nettlesome critcis by compelling them to sit through his nightclub act, reunite with this family not for tears and regrets but for good times and real love... You can go through his catalog of songs and parse his lyrics any number of ways and marvel at the sweet subtleties he created with such clear, unmannered and un-fussy language. He was an Everyman who was appealing because he wasn't trying to impress anyone or blow them away with Big Stories with Big Message, messages that were rather hackneyed, ala Harry Chapin.Prine's ambition seemed not much more than to be the best songwriter he could be , someone surprised that a great many others over the years admired his rich body of work