THE GRIND OF THE GROTTO MOUTHS 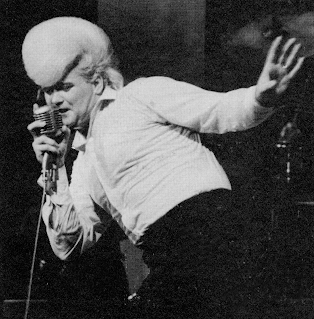 It might sound like a crime against nature, or a crime against common-sense and moral order, but there are indeed  white singers who have technically awful voices  who have managed to fashion vocal styles that are instantly distinct, unique, recognizable.  (Wayne Cochran, a blue-eyed soul guy pictured above, is not one of those. He is energetic and high-spirited, but never gets far beyond the minstrel aspect of what he does. He simply cannot sing anything well.) Mick Jagger is a vocalist who learned to work brilliantly with the little singing ability God deigned to give him: knowing that he didn't have the basic equipment to even come close to simulating Muddy Waters or Wilson Pickett, he did something else instead in trying to sing black and black informed music-- talk-singing, the whiny, mewling purr, the bull moose grunt, the roar, the grunts and groans, the slurs and little noises, all of which he could orchestrate into amazing, memorable performances.
One Plus One(Sympathy for the Devil)Godard's film of the Stones writing, rehearsing and finally recording the song of the title, is especially good because it captures the irresolute tedium of studio existence (in between Godard's didactic absurdist sketches attempting to address the conundrum of leftist media figures used by invisible powers to squelch true revolutionary change). More than that, we see Jagger piecing together his vocal, his mewling reading of the lyrics from the lyric sheet; his voice is awful, in its natural state. But we do witness Jagger getting bolder as the song progresses through the endless stoned jamming, a grunt added here, a raised syllable here, a wavering croon there.
Finally, we are at the last take, and Jagger is in  headphones on, isolated from the others, screaming his head off into a microphone while the instrumental playback pours forth, in what is presumably the final take. Jagger, all irony and self-awareness, created something riveting and for all time with the marginal instrument he was born with, and is part of what, I think, is a grand tradition of white performers who haven't a prayer of sounding actually black who nonetheless molded a style of black-nuanced singing that's perfectly credible: Mose Allison, Van Morrison, Felix Cavalari (Rascals), Eric Burdon (early Animals), Peter Wolf, late of the underappreciated J.Geils Band. We cannot underestimate Keith Richard's contribution to Jagger's success as a vocalist. Someone had to know how to write tunes Jagger could handle, and Keith was just the man to do it. Richard's guitar work, as well, riffs and attacks and staggers in ways that match Jagger's strutting and mincing. Writing is everything, as always.
at October 21, 2020 1 comment:

Email ThisBlogThis!Share to TwitterShare to FacebookShare to Pinterest
Labels: VOCALISTS 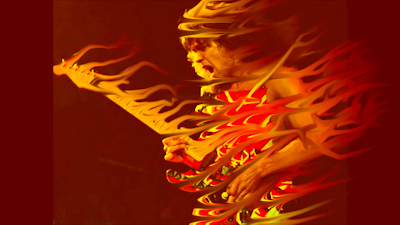 Eddie Van Halen, the Last Guitar Hero, has died, age 65, from a long battle with cancer. I will say now that EVH is the man most responsible for saving hard rock from withering away . His guitar innovations changed the way other guitarists approached the instrument. Although I had more or less graduated from rock and considered myself a jazz fan and amateur historian of same such music, and restricted my rock reviewing activities mostly to poets, auteurs with deep seated issues, Van Halen's albums were ones I didn't sell off or give away.
I realized years ago, when I was about to graduate to 60 years of existence, that the adult in me often enough needed not Mahler or Miles or Manheim Steamroller but instead give into the need to get up close and personal to guitar genius Eddie Van Halen as he took his zooming, strafing, dive bombing, hurly burly solo on the song "China Town" off the final Van Halen studio album A Different Kind of Truth . It was the usual brilliance from this musician, anchored in place with solid ensemble parts and one of the best rhythm sections in rock history, Eddie Van Halen doing tricks of the hard trade on the fret board; long , fluid lines, glass shattering squeals and screams with the whammy bar and foot pedals, fast, rapid, poised classical references liberally deployed with the standard and over-standard blues riffing, Van Halen was an instrumentalist of rare, rare skill , someone with an excitement factor that added up to the kind of amiable virtuosity that didn't age a bit. I am , of course, talking about his guitar work, which remained superb in his five decades as a band leader, and not the band's albums, more than a couple being routinely lunkheaded in the songwriting and frat boy world view. But that guitar playing!
The supposed requirement that I was to grow up finally at a certain time and act my age with more "age appropriate" music ( what? My parents Big Band collection? My Mom liked to listen to X) is a lie I told myself. I am acting my age and this shredding fete on the fret is age appropriate appropriate The riffs are fluid, flowing with the liquid clarity of an rapidly moving stream, a fluency accented with odd classical formations and post modern blues bends, sub-dominant notes pitched to the heavens. Speed, style, an instinct for getting to the essence of the implied emotional narrative an instrumental should have. This is exciting stuff. There are rock guitarists aplenty who have emerged in the wake of the revolution in technique Eddie Van Halen introduced in the mid seventies who are, maybe, maybe consistently faster, involve themselves in more complicated (as opposed to complex) expositions, but very few of them have EVH's freshness, his flawless instinct fills and suitably choked chords. He has the gift of knowing when to start a solo, and when to end it. He is the man to beat. So far, undefeated.
David Lee Roth on this disc did not have the range or vocal color he used to, he had from back in the day, talk-belting rasp and attitude for the outrageous accents EVH saturates this hook-happy tunes with. What impressed me the most was that this was a great album all the way through. The riffs are hooky, to say the least, the bridges go to places you wouldn't expect, the choruses are splendidly hummable. And Alex VanHalen and Wolfgang VH are a perfect rhythm section. Most of all, though, Eddie plays with an energy and ingenuity we haven't heard in years. It's his guitar work that attracts me to this band, the nasty, sexy, whammy bar -delineated solos that rise up in the full glory and quick witted élan of post-blues rock virtuosity.
at October 08, 2020 No comments:

MORE QUICK AND GLIB ANSWERS TO QUESTIONS FROM QUORA

A query came my way recently which asked a perennial question from the crowd that doesn't "get" poetry: why do people bother to write boring poetry? The question had a tangible snorting contempt to it. For him, I'd wager that he finds all poetry dull, crushingly so. But my answer was this:

Why does anyone make boring art, since you’re asking. The poets who write boring verse are most of the people who fancy themselves word slingers of that sort—quantity diminishes quality. It seems that most of the poems one comes across from new poets in whatever forum—magazine, open reading, workshop, high school newspaper, university press— are pretty much eccentric minds with pedestrian sense of language application who want to capture big ideas, big emotions and big spiritual concepts in pathetically clunky sentences , often choking their best ideas to death with overworked metaphors , unmusical similes and a fatal lack of self awareness as to whether what they spend so much time writing is something an actual reader beyond their circle of friends might want to read. We also suffer from the tone deaf experimenters who want to be abstract, avant garde and boldly innovative who haven’t the slightest idea of how to be interesting in an opaque way. John Ashbery, Bob Perleman, Leslie Scalapino, Gertrude Stein—they were hard to understand as poets go, but they were lively , innovative and striking in their styles and and habits of phrase making, and they are the exceptions to the idea that most avant gard poetry, as such, is abstract for its own sake and therefore useless and a grind. Consider also that there are bored and there fore boring readers of poetry who render judgements that typically amount to “meh”. These folks are a species of glum Gusses and Gussies who might as well be flipping the TV channels .

Some else asked me a not unreasonable question, was Norman Mailer a misogynists? Mailer was obsessed with a notion of heterosexual masculinity, culled from his idealization of Hemingway and especially D. H. Lawrence. His writings on the subject are fascinating , and his assertions and literary criticism in his polemic “The Prisoner of Sex” are often brilliant and on point as he takes on feminist theories, but with all the force and grace the prose provides, Mailer insisted women take a secondary position in society and in all social relations, secondary to men. He would recount that his nay saying and the insults and violent fantasies were expressions of respect rather than contempt, and perhaps that is what he honestly thought, consciously, he was doing.

All said, though, Mailer seemed rather to be trying to work some matters out in both his social and philosophical ideas, and in his fiction. His attitude regarding the role women play in is a conception of a reality where every player is on an existential path of self-definition constantly prefers the experience and success of the male over the female, with accompanying rationalizations that the advance of women toward an equal social and political status upsets the spiritual ecology . The only thing I can take away from that attitude, expressed and refined for decades, is an active contempt for women, misogyny when all is said.Joyce Carol Oates has some wonderful essays on Mailer that are worth seeking out on this man and his relationship to womankind. Mailer was a writer of large gifts and frequent genius who had issues that make appreciating his best work forever problematic.

Someone was curious enough to ask me who I thought would win in a debate, right wing pundit Ben Shapiro, or linguist and political activist Noam Chomsky. I sought a responsible tone when I responded like so: We will have to be fair in this theoretical context and add we are imagining a younger Chomsky against Shapiro. Shapiro is bright and quick, of course, but he is an inch deep on most issues and tries to distract opponents with a bunch of hypotheticals that are often effective against less skilled debaters. The master of this technique, the presenter of the gratuitous supposition and linguistic trickery was William F. Buckley, godfather of the New Right and longtime host of the debate program firing line. There is an episode of Firing Line on YouTube where Chomsky is the guest, the subject of discussion being US foreign policy in South East Asia.

Buckley had seriously under estimated Chomsky and his arsenal of techniques to undermine the famed linguist were to no avail; Chomsky is a scholar of the first rank and had thoroughly studied the subject at hand from historical, economic and cultural perspectives, and blended the data in cogent analysis. Chomsky at several points had to correct Buckley as to the facts of the matter at hand. If this were a prize fight, Chomsky would have knocked Buckley out in the first round. Buckley was visibly pissed at having been bested on his own show and for the cameras invited Chomsky back for another discussion. But that invitation was never sent. Sharpiro, remember, is no where near Buckley’s weight division nor skill (to extend the boxing metaphor) . Shapiro going up against Chomsky in a battle of the minds wouldn’t be debate; it would be a human sacrifice.

The Buckley-Chomsky debate can be seen it its entirety on You Tube.