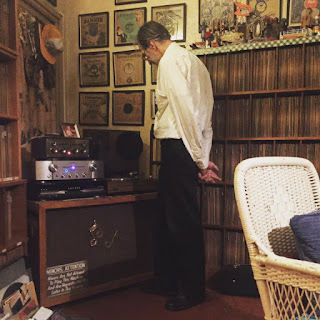 It's been my feeling that poets express their contempt of poetry by continuing to write poems about poetry. This isn't the garden variety poetaster at an open reading who furiously scribbles breathless, broken-lined manifestos about the responsibilities and burden of being a poet in a blind and cruel world; this is poetry as Priesthood, a habit of thinking many who have lapsed from their own religions and seek to imprint their inadequate sense of how the universe functions behind the veil on the entirety of poetry itself. Those blessed (and burdened) with the gift of seeing things as they really are become the cliche's greatest promoter. There is no ridding the world of these good folks.It's the serious poets, the ones with books and reviews of their work, who work teaching poetry survey courses and conduct workshops.

During my time as member of Slate's belated Poems Fray discussion board, where a good many bright discussants would parse, yay or nay, poetry editor Robert Pinsky's choice for Slate's Poem of the week, I noticed a rash of poems that could not back away from the urge to invoke of some sort; the rationalizations in the critical jargon was rich and insightful in how many of us argue for something without telling anyone how any of it is any good for us, but it never seemed to me to be more than a go-to move for a poet who is stumped at any ironic turning point.

A poet begins the poem talking about being a poet wrestling with reality by poetic means and at the end of linking associations, one after the other, in that essaying forth of getting a peek beyond the mere appearances of the world, some goes awry in the speculation and dreamy thinking that contradicts everything and lo!, the poet finds out that he or she has been relying upon a literary form that will not reveal the thing-ness of things no matter how effervescent the poetry is. We cannot escape the prison house of language, the poet finds, the music swells, the sun sets on the poet as he or she grows cold and melancholy in their realization that their craft is useless for anything other than reminding themselves that the senses are fallible.  The end.

Every defense has been given within the confines of the poem itself, not in any discussion happening in the room, at a table, filled with people who’ve read and seek to discover what is they felt, what they thought, what the thought about how they felt.  The written is written to short circuit our emotional with the verses that have been read—our discussions are guided along a primrose path and little spontaneity of response, no honestly felt and strongly argued exclamation of “this sucks phallic verbs “.  What it all means not longer matters, not on a group level, not as a pastiche  of  responses culled from a brainstorming of interpretations, not from  a sudden image of a time formerly locked away in the deeper recesses of memory that now emerges again to haunt you and further stain your expectations of some kind of renewal through right living and solemn vows. Worse, we discover that may none of it mattered anyway.

Many stanzas, rhymed, unrhymed, irregular, evocative and vague,  have changed nothing in the world. What it has done is make being alive in those naked minutes when dread and fuck off panic nearly overwhelms you. Poetry, the art of the allusive line and image that seem to  be about something,makes being in this cold light of fear bearable for another minute,another hour, until the fear slumbers again and you are something like sane again, smiling, eager for breakfast and a walk in the  sun, or at least a couple of long distance phone calls.

album review:LEANING IN AND OUT OF THE SUNLIGHT

Introspection, guilt, a wan hope of transcendence through the attainment of a love that cleanses the soul of all sins real and imagined, perceptions of failure that will not relent, a personal paradigm of feelings so deep that the world, indeed the universe, is coded by the severe lack of self esteem, the ever deepening chasm of depression. Those are my impression of what is generally regarded as Goth rock, the decades of stylized gloom and regret and corrosive self -regard that’s made listening to tunes by The Cure, Bauhaus, and the solo offerings of Peter Murphy work to listen to, even in my leisure time; I’m a sucker for suffering poets, outcast lovers standing upon a widow’s walk or overlooking a stormy ocean from a high, jagged cliff. Eccentrics that don’t fit in with the cookie-cutter approximations of normal behavior and attitude spoke to me for a period when I was in my own private hell as a teen who found solace in Dylan and Leonard Cohen and in the deeper metaphors of Romantic Poets for whom the insanity of being ruled by emotion was more valuable than sex or money.
Into adulthood, of course, I eventually got my terminal uniqueness and took an adult approach to matters, but not entirely. Some of me longed to immerse myself in the vats of sadness again, wallow, put on head phones and drink a rank glass of sherry, droning, guitar and synth laced songs making the cruelty of the world a personal matter. It is, in the final consideration, all about me and my feelings. Of course this is the equivalent of picking the scab and taking pleasure in the wound not healing. The seductive tones of Goth placed its tattered shawl around my shoulders more than once.
Sluka, nee Christopher Sluka, is a San Diego based singer songwriter in the Goth mold, ironic as his home base is famous for sunshine and beaches, not cliffs, dark skies or weather that reinforces dark moods. He is, though, good at the style, quite good, in fact. His latest release, Introversions shows us a man who knows the considered craft of writing solid pop tunes and who appreciates the need for variety in the flow of material. Figuring alluring riffs on keyboards and synths and supplying a variety of hooks and instrumental textures, this percolates along, each track pulling you in with a personality of its own. The lead instrument is Sluka’s remarkable voice, at first making you think of David Bowie (or Bowie’s primary influence vocally, Anthony Newley), but the resemblance fades away as this artist convincingly converts existential dread and worry into playfully , soulfully inflected readings of the surreal lyrics. Agonized crooning, Beatlesque harmonies, emphatic phrasing on the harder edged material, Introversions , as the title implies, is a series of testaments of a man investigating his emotions , with the hope that he can transcend them. This is very much about the old adage, reputedly coined by uber gloomster Nietzsche , that if you stare into the abyss, the abyss will wind up staring at you. The hitch, however, is that Sluka prefers a little flavor to his plate, a little color to shine in to the dank vault of a world view. He remembers to rock, to croon, to laugh (if slightly) to lift his voice on high (if briefly) before it it drags along the lower registers again, grainy and unloved.

The stylistic range is impressive, with album opener “Valentine Lies”, guided by pensive piano configurations and melodramatic beats, climbs from the ground up, with Sluka’s voice capturing the mood of a man giving himself over to the sweep of love. “San Diego Zoo” takes a lighter, airier approach, strummed guitar and tasty, short guitar riffs, sweets bits of whimsy and regret, a man looking to move out of the dark house and into the sunshine of the spirit. Sluka’s voice’s, at once nasal, husky, and amazingly lithe, phrases the contradictions concisely. The final track, “Gothic Cavalier”, is the strongest song, a bit of menace provided by chunky guitar chords, a persistent bass and synth textures that overlay an enterprisingly off-kilter melody, the song swells at the chorus as Sluka relates the first person tale of a man seemingly encased in a gloom he cannot shake, an observer, a man of part unable to make lasting connections with the normal life.
This is, in a word, catchy as anything you’re likely to come across among recent releases. Sluka’s preferred mood, of course, is downcast, the fatalistic pessimism and anesthetized moodiness that are the creative grounds for poets and assorted fans afflicted with swampy temperaments, but what gets me to play Introversions again and again in one day are his hooks, his riffs, his melodies, his skill at varying his moods and styles and thereby modulating his songs through a richer than usual selection of emotions. His music is catchier, his manner is more questing, searching, a man in a dark room braving a bit of sunshine, a little bit of joy.
at August 27, 2016 No comments: