BOB DYLAN IS NOT A POET

An old peeve, this: Bob Dylan is not a poet.He is a songwriter. What he does is significantly different than what a poet does. In any relevant sense, the best of what poetry offers is read off the page, sans melody from accompanying guitar or piano and a convincingly evocative voice. The poet's musical sense, the rhythmic properties and other euphonious qualities, are derived from the words and their knowing combinations alone. A reader may appreciate the words, the rhymes, the cadences, the melodious resonance and dissonance, as the case may be, but all this comes from the language of the poem alone, on the page, without music. The musicality we speak of 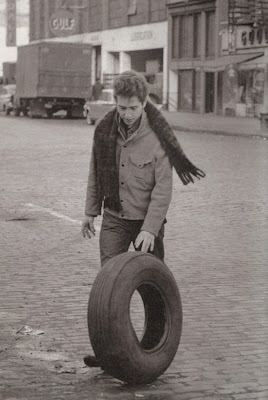 when addressing such rich and soul-stirring sounds of nouns and adjectives conjoined has everything to with the poet extending the limits of everyday speech. You are able to read Shakespeare to the fullest potential without an accompanying melody, just as you are with E.A. Poe and other poets one can cite. Dylan is a songwriter, a distinct art form, and his words are lyrics, which cannot be experienced to their fullest without the music that goes along with them. One may, of course, hum the melodies while pouring over the lyrics, and mentally reconstruct of listening to songs off an album, but this proves the point. Of themselves, Dylan's lyrics pale badly compared to page poets. With his music, the lyrics come alive and artful, at their best. They are lyrics, inseparable from their melodies, and not poems, which have another kind of life altogether


Of themselves, the lyrics are flat and unremarkable save for their strangeness, which is not especially interesting in verbal terms. With music, voila! transformation. This is a condition that makes what Dylan does songwriting, not the writing of poetry. These are distinct art forms with features and rules of composition that are crucial and non-negotiable. Cohen is an interesting case, since he inhabits several writing mediums, IE, novels, poetry, plays music. He's not especially prolific in any of these areas--over the forty plus years that he's been on my radar his output has been meager, albeit high quality--but it occurs to me that he's more of an actual writer than Dylan is. They are different sorts of geniuses. Cohen, of course, is a novelist over all—“Beautiful Losers”, “The Favorite Game”--and a poet, someone wholly committed to making the words form their own music, rhythm and power so that the sort of splendid, soul-racked suffering he specializes in, that deliciously wrought agony that's midway between spiritual experience and sexual release, is fully conveyed to the reader and made as felt as possible.


Cohen tends the words he uses more than Dylan does; his language is strange and abstruse at times, but beyond the oddity of the existence he sets upon his canvas there exist an element that is persuasive, alluring, masterfully wrought with a writing, from the page alone, that blends all the attendant aspects of Cohen's stressed worldliness-- sexuality, religious ecstasy, the burden of his whiteness-- into a whole.It is presented in a way that is subtly argued, minutely detailed, expertly layered with just so many fine, exacting touches of language. His songs, which I fine the finest of the late 20th century in English--only Dylan, Costello, Mitchell and Paul Simon have comparable bodies of work--we find more attention given to the effect of every word and phrase that's applied to his themes, his story lines. In many ways I would say Cohen is a better lyricist than Dylan because he's a better writer over all. Unlike Dylan, who has been indiscriminate for the last thirty years about the quality of work he's released, there is scarcely anything in Cohen's songbook you would characterize as a cast-off.


Dylan's genius is closer the kind of brilliance we see in Miles Davis, where the influences of unlike styles of music and other elements-- traditional folk, rock and roll, protest songs, blues, country, French symbolism, Beat poets--were mixed in ways that created a new kind of music, and required a new critical language to discuss what it was he had done with the influences he'd assimilated, and the range of his influence. It is possible to look at aspects of Dylan's art and find individual strands wanting--his lyrics may be unfocused or strange for their own sake, his melodies are either borrowed or lack sophistication, his singing is nasal and grating--but taken together, music, words, voice, instrumentation fused, one experiences catharsis, power and galvanizing mysticism in the best recorded moments. "Ballad of a Thin Man" is a flat, curious scribble of a lyric read by itself, but with the minor key intonations of Al Kooper's keyboard and Mike Bloomfield's interned guitar, coupled with Dylan's leering, snarling dramatization of the lyric, we have an art that is riveting n terms that are purely musical; yes, one might go on at length and create a cosmology of what Dylan's lyrical creations make of experience, but the emphasis needs to remain on the whole.” Desolation Row" and "Visions of Johanna", two songs from what I think is the center of Dylan's greatest period as a song-poet, if you will, likewise are not to make their fantastic excursions through Dali-esque landscapes alone on the page, as flat print.

Dylan's chords, his voice, and his forward-march rhythms are what make these extended lyrics become crisp and suggestive of metaphysical chaos under a thin the thin guise of civility and reason. Drums, organs, twangy and tuneless guitars, police sirens, his braying voice bring a dimension to the lyrics that are there without it. Dylan's lyrics especially--more so than Cole Porter, more so than Chuck Berry, more so than a host of his contemporaries--are not self-sufficient as page-poets are with their work. It can be argued that what Dylan has done is more complex, subtler and requiring a new vocabulary to discuss than what writerly poets have done, and something I would subscribe to on principle. Dylan remains a songwriter first and foremost, and a poet only through loose analogy. In all, Dylan's lyrics serve the musical experience, the concept of a song, which makes Dylan a songwriter of genius, but not a poet. Poets, when they are writing poetry and not novels or songs of their own, are committed to making language, and language alone, the means through which their ethereal notions will be preserved. Success or failure on their part depends solely on how well they are able to write, not strum a guitar or croon a tune.
at May 24, 2013 No comments:

"Meet Me In the Parking Lot": Stories by Alexandra Leggard

Flannery O'Connor, Russell Banks and Jersey Kozinzky meet for coffee, hash browns and small talk about psychic exile and the best sort of knife edge to hack through a bothersome bit of bone. Odd, disturbing, violent material here--violence either explicit or always at the edge of the crystallized situations here--all of which are made more jarring with Alexandra Leggat's taste for terse sentences and abrupt endings. It works, for the most part, and the arc through the stories, life inside cars, on dark streets, side roads, parking lots behind anonymous bars, presents us with any number of dazed, abused and high strung women and rattled, crazed, raging men enacting any number of strange movements and quirks. At best, these stories are an adrenaline jolt, speaking truly to the sort of flash that gives one the urge to leap in front of traffic, to challenge immensity of grave and incalculable danger. Fans of Joyce Carole Oates take note , as Leggat seems a likely and artful heir to her position as chronicler of the Imperiled Woman.
at May 23, 2013 No comments:

I talk so the birds 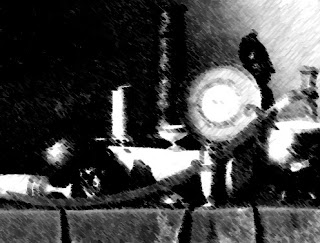 I talk so  the birds

I talk so the birds
do not fall from the trees
and bruise their feathers
whatever the weather,

I  sing so the bricks kiss the mortar
like the two were sealing a deal,
a conspiracy to grow old fall where they stand,
I dream so that you will love me
because you see my face
when I'm not looking at it
rehearsing a pose and stare
I think will send you to the stars,

I walk everywhere I go
to keep the earth spinning
where it belongs
with the other marbles,
making music that
is far from the center
yet near the heart
of wonderful things
nameless and unseen.