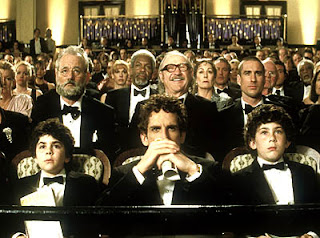 Slate writer Jonah Weiner was all in a dither this week writing about film maker Wes Anderson's emphasis on white people as principle protagonists, and for what he considers the director's patronizing attitude toward nonwhite. He does a crackerjack job of working himself into an rude lather, and comes perilously near to calling Anderson racist in his movies. As evidence he cites Danny Glover's character in The Royal Tennebaums,a black man who was bookish, civil, bumbling, soft spoken and a drab, rumpled dresser, as well as the black shipmate in The Life Aquatic who plays David Bowie tunes on an acoustic guitar and sings them in Portuguese. Weiner strips his threads as he rummages through his old literature books on post-colonial theory and produces a strange, hypervenilating rant. What I sense is a bad case of someone not getting it, or at least not grasping the crisp irony of Anderson's not always successful brand of satire.


Frank Lentricchia, a renowned professor of literature and critic, wrote an article for the late publication Lingua Franca in which he bemoaned the situation of political cant trumping an analysis of what a given novel is actually about. To paraphrase, Lentricchia wrote that while he was lecturing on Don DeLillo's novel White Noise, a student complained that the book was racist. He asked what was racist about DeLillo's book. The student replied that the book was racist because there were no people of color in the narrative. Lentricchia responded by saying that the novel was about white people and the white world in which they lived, but observed that the student was unsatisfied. The inference is that the student was, for the time being, incapable of getting to the heart of DeLillo's satire, and that it would be years, perhaps, before experience chipped away at the certainity that buffers both the heart and the funny bone.

I sympathize with Lentricchia's exasperation over his nay saying student's knee jerk response to the book, and I'd advance Jonah Weiner's Wes Anderson hand -wringing article as another example of someone advancing a mouldy heap of retreaded Saidisms as thoughtful objection. Anderson is obnoxious in many ways, but what he does get right in his films is the peculiar naivete many white people display in their interactions with blacks, Asians and Hispanics, bringing with them a culturally loaded package of assumptions that aren't easily changed.

It's a low key, shoulder slumping satire that he's advancing here, reducing his Caucasian protagonists to a stylized set of minimalist ticks that expose their lack of true worldliness. That he doesn't create non white characters of heroic virtue , slowly and silently suffering the moronic jabs of their white counterparts, is pretty much the point here, and it's to Anderson's credit that he maintains the deadpan style through out his films. There is , as well, something flatly paternal in Weiner's argument, which is marmish and prim in it's lecturing mode, implying that it's immoral for a white man to create nonwhite characters who are just as offbeat, quirky and defying of stereotypes as their white counterparts. It's paternal in the sense that he is demanding that nonwhites maintain their dignity overall, that they never be cast in any sense that can be construed as ridicule. This is slave owner thinking, and that issue is not his to fight. I suspect that Glover appreciated the chance to play a character.

The point is to show up the failings of his white characters as they pursue their various delusions, whether a new claim to fortune or mythical sharks; his films are slide shows, not lectures on race relations. While I think Anderson's work is uneven, certainly, I am relieved that he has no desire to become a latter day Norman Lear.
at September 28, 2007 No comments: