Smoking Sucks. And it Blows 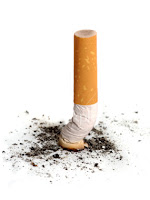 It came up in a conversation with another ex-problem drinker about the relative demoralization and levels of unmanageability caused by addiction to alcohol and cigarettes. I had championed that those new to sobriety perhaps ought to stop smoking as well as cease their intake of booze and sundry narcotics. My friend maintained a traditional line, let the newcomer smoke until they're ready to quit. He said

They don't make you steal from your family, abandon your family and destroy marriages.

It's an odd loop here; addicts steal to buy drugs, which are very expensive because they are illegal. If cigarettes were illegal, I have no doubt they'd be a major contributor to smokers entering committing crimes and destroying relationships in order to support their habit. Cigarettes, however, do take control of a portion of your brain, if not steal it whole; like it or not a smoker becomes addicted and their use has programmed them to ingest cigarette smoke at regular intervals, whether the smoker wants to or not.

It was once postulated that I had bigger fish to fry when I sobered up twenty two years ago; let the man smoke was the conventional wisdom. Truth be told, though, I would have quit had the nicotine gum been available in 1987, the year I took the drinking cure. I figure I would have saved myself several thousand dollars in cash I would have spent to support my pack and a half a day habit, and I would have avoided, I think, several bad colds and not have missed so much work because I was compelled to smoke outdoors, in the rain in winter, when I had the need to excuse myself and fire up a Marlboro. I might have had my self esteem lift somewhat as well and felt more in the mainstream of life had I quit; as it went, I was one of those people you see on cold, rainy days standing in the service entrances of where they work, smoking away, sequestered and ghettoized , conspicuous drug addicts getting their fix. The allure of the outlaw faded quickly.
Seeing the death and sickness and misery and financial burden of medical bills ruin the lives of friends and family, I can't think of many health decisions more important than to quit smoking. To diminish the severity of the destruction these odious products bring to people is, in my less than humble opinion, to really deal with the cold facts of the matter.
at September 03, 2009 1 comment: