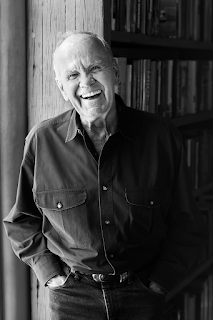 After a long absence from fiction, Cormac McCarthy returns with a double dose of his bleak imaginings with this month's release of this novel The Passenger, to be followed up in December with a second novel, Stella Maris. The second book, I understand, is a continuation of the hard-scrabble tale begun in The Passenger. Fittingly, the two novels will be sold eventually as a boxed set. At 89 years old, these are likely to be McCarthy's last additions to his fatalistic oeuvre, assuming that no posthumous "lost" books find publication after his eventual passing.

I haven't read The Passenger as yet, but being one of those who think McCarthy ought to be given a Nobel Prize for Literature, odds are that I'll find the strange pleasure one experiences reading some of the finger work from this brutal and often brilliant poet of the brutal forecast. Laura Miller, book critic for Slate, apparently has little sympathy for a masculine world view in literary fiction and finds McCarthy's reputation both inflated and needlessly, pointlessly violent, taking time to serve some implied shade against Hemingway, Faulkner, Don DeLillo and James Ellroy. She awarded The Passenger a well-honed negative review. This was a surprising take. Miller 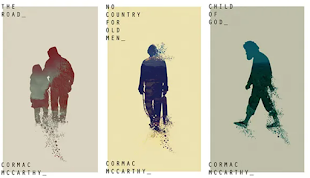 is usually a first-rate book critic, but her arguments here against the Cult of Cormac that sound thin, however well worded they are. The review reads more like a string of sentences she's been saving up for a while to say against the author the first chance she had. She might be gone off on an anti-McCarthy screed before, but no matter.

Whether consulting his Inner Hemingway or hailing the Faulkner Within to make his prose compelling and effective in conveying the tragic atmospheres that are his literary domain, McCarthy has displayed mastery over his influences and forged an original and forceful voice of his own. Great writers have their deep and obsessive roots in persistent perceptions of how the universe of their respective understandings unfold, churn, create and destroys the nature of its existence despite heroic efforts to change and somehow improve the course of human events, and McCarthy has held to his doomed visage. This author as a committed Hobbesian who sees himself as the effective witness to what existence is after the collapse of the Leviathan; nasty, brutish and short.

Though not meeting the stamp of approval from 21st century tastemakers, the struggles, and experiences of masculinity has been a rich vein for masterpieces for quite a good while, from Conrad, Mailer, London, Lawrence, McGuane and too many others to name-drop, and the relevance of their collective bodies of work cannot be wholly discarded or ignored only because it's inconvenient for what passes as the present conversation about what a writer's responsibility to a reader is. I prefer to keep that task simple and straightforward, which is a writer of fiction give an honest accounting of the problems that confront a set of characters. At 89, McCarthy has remained committed to the dictates of his imagination. That's all he's been required to do over a long career.

All this said, I have the Passenger on my desk, and I'll have it read soon enough, and from there a substantial view of the novel might arise. But there's been usually a state of shock after I've finished the other McCarthy novels--Blood Meridian, The Road, No Country for Old Men, and I've put off writing about this writer if for no reason apart from not wanting to think too long or too deeply about the horror that McCarthy dares to look straight in the eye and describe without flinching.