Davidson on Age and Disability on Poets 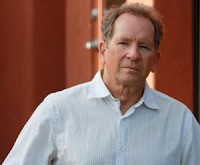 Here is a brilliant essay / poem / talk piece by poet and critic Michael Davidson, one of my  professors at UCSD when I  was becoming involved with poetry and poetics. He writes here of the effects / influence of aging and /or having a disability has on a an artist's work . I read this with great interest because I've sufficiently aged to the extent that I've noted a change in the tone and subject of my poems and found insight in how my lifetime hearing loss formed in large measure my sense of poetic process. I've called it the Norm Crosby Aspect. Crosby was an old school comedian I had seen on  the Ed Sullivan Show a dozen times at least, an affable presence whose shtick was the mispronunciation and punning misuse of language.  It turns out that the Crosby was very hard of hearing, wore two hearing aids, and like me often tried to bluff his way through social situations when younger and pretended to understand what others were saying. When responding to what he thought he heard, he related, his answers seemed strange and surreal and non-sequential.  He turned into a comedy act and I, who also tried to fake my way through encounters I could only make out half of,  started to write poetry. Wonderful essay from one of the best contemporary critics writing.