A poem by Joyce Carol Oates 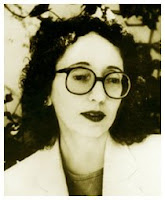 "Kite Poem", the Joyce Carol Oates poem selected and posted at Slate.com posted at Slate.com by U.S. Poet Laureate Robert Pinksy a year or so ago, brought audible moans from my lips when I first read it and considered it at the time to be her expected stew of haphazard, unproductive edginess. It was settled: violations of form which worked for her fiction writing more often than not made her poems drear and precious attempts to dance along the edge of reason in hopes art results in the transgression. I re-read it today to see if I had been too harsh, too quick to judge, reacting in a pique of professional jealousy. I gave it another several going over:

Her art as a prose writer is problematic enough; depending on who you talk to, she is either the most important American novelist since Faulkner or she is a grotesque aberration of the language, taking too little care to craft her ideas or her prose. I am somewhere in the center of that controversy, thinking that she writes too rapidly to be consistently good, but acknowledge that she here novels have oft times been brilliant explorations of the psychologically marginal personality and that at her best she can produce great fiction that concerns itself with the sudden violence that can visit any of us , at any time. She is a major novelist, like it or not. But she is an awful poet, and why she follows this thing other than the compulsion to write in every style and genre she comes upon--look ma, no hands. But what it seems she's attempting to show us as being an effortless work is instead cryptic, undecided, and full of awkward poses. The form is one thing, rather clever in a third-grade crafts class kind of way, but a move that begs for a death sentence. Those of us old enough to remember the fad for concrete poetry and the quizzically airless experiments of Richard Kostelanetz and his late modernist cronies will find this ploy, well, quaint. Better that Oates concern herself with content because the form otherwise dictates something like the air itself; emptiness.

I think, maybe, that Oates is proposing a new form of poetry, Compressed Literalism, as there's the feeling that she intends nothing beyond the banality of this unremarkable lines. That would have been fine had there something else implied, something another feeling, idea, a paradox of things in the normative world that the sight of kites that provoked Oates to speak of these things. Imagists, at their best, ("The Red Wheel Barrel", "In the Metro"), manage to create whole worlds with their precise treatment of the image. Oates evokes nothing else other than an offhand remark that only seems to start an idea and never finishes it. The last word "heap", signifying the end of the kite's tail, is meant for us to get some irony visually, where the banal words are expanded, elaborated upon in our own imaginations. We're meant to finish the poem ourselves by operating as co-authors, but there is not enough art in all of Oates' artifice. It's cute, contrived and dreadful, and it's a sin for a writer of Oates' otherwise impressive accomplishments to waste her reader's time with these soporific outings. Better another half dozen half-baked novellas in the likely chance a keeper is produced than any more stanzas that are without effort, art or a hint of lyric grace. Mary Ann from Slate's Poetry Fray Bulletin Board asks "Maybe she saves her "better" poems for hard copy literary journals, and uses Slate for her more off-hand pieces."

Doubtful. I've read a few of her poems over two decades, and what's appeared on Slate is par for the course. She really hasn't the ear or the eye for the off-hand associations this sort of fragmented, harsh free verse she wants to write, ala Denise Levertov, Diane Wakowski, or the sainted Sylvia Plath. Nor does she have the patience to create a plausible case where negative capability plays forth. Her verses are ideas disguised as poems, but what's missing is a natural sounding diction, a voice, and a sense of imagery that has the seamless quality of the natural talent.

She is a natural fiction writer of a certain kind, and a decent playwright from what I hear. But she remains a bad poet.If she wrote at a slower pace -- say, producing one novel a year ala Updike -- she'd get high praises for improving her craft and writing better-crafted novels. She already receives mostly glowing reviews from critics; it's funny that it's those of us in the trenches, the readers, who do most of the complaining about Oate's hasty outpouring. She writes as if she wants to get the Nobel Prize in the worst way. Writing so many half-baked novels is certainly the worst way to go about it. Beasts, a novella she released last year, is the kind of penny-dreadful she's wont to write and attempt something of a reversed feminist take on the subject of violence against women, in this case, the story of a young woman who falls for the power she believes resides in the knowledge and experience her poetry professor possesses. Naturally, what happens is that the girl is summarily drugged, raped, and subjected to various indignities, all of which will shatter her idealism and motivate her to change her assumptions, and effect a devastating revenge. Compelling in an abstract way, as a topic for a coffee glitch, but botched in the novel; the prose reads without a hint of conviction and would be more suitable if it were the treatment for the script of a miserable made for TV film.
at April 16, 2007