SYLVIA PLATH:The Worship of the Dead 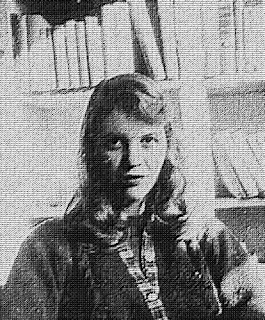 There was a bit of commotion concerning the cover of the 50th-anniversary edition of the late Sylvia Plath's touchstone novel, The Bell Jar, an understandable misgiving on the part of the book's loyalists. The book, a wrenching, semi-autobiographical narrative about a young woman's slide into mental illness, is a serious, unfunny, poetic evocation of female insanity and is a hallmark of a good amount of Feminist literary criticism. it is not a laughing matter, but publishers, like other media corporations with long term holdings, at times feel compelled to update a commodity's image for a younger crowd that has yet to read a masterpiece of misery. Presto, the 50th Anniversary Edition features a woman's profile gazing into a compact mirror, applying to make up; Plath's attempt to write her demons out of commission is made to resemble the worst version of Chic Lit. Plath deserves better. It's a good book and it requires an honest presentation.

Has anyone said that they are exhausted by the relentless attention accorded the late and legendary Sylvia Plath? Am I the only one who thinks that we ought to stop metaphorically digging up Sylvia Plath's body so we may once again gawk at her bony remains through a lens of deferred yearning? Generation after generation discovers and rediscovers her work, which is fine, but the grave robbing worship that goes on here elevates her literary worth beyond sane judgment. There is a death cult within the legions of her admirers whose applied aesthetic insists that the extreme personalist poets achieve greatness only when they perform their final and greatest act, their suicide. It's disgusting stuff, and it's perverse to think that there was once an active set of famous poets whose art could be deemed successful if their lives ended under odious circumstances.

I'm not averse to regarding Plath as a major American poet--she showed a compelling, surreal, tortured brilliance that was fully realized although her time was brief. What concerns me is the virtual cult of Plath who mistake her tragedy as having something to do with her art, and regard her writing as perfect precisely because committed suicide. This has more do with martyr making and nothing to do with her powerful, sometimes brilliant writing. The cultist obsession with her brief life causes many to miss the fact that she was a poet to be considered as an artist, not an example of the skewed notion of beauty. There seems to be an addiction to a what many of created as a figure of Mythic Suffering, another Jesus stand-in, upon whose rumored visage and back story one may read their own sufferings and take solace that their shared misery's finest expression was from a victim who never overcame their ills, travails and psychic deterioration. It stops being about poetry and the empathy it creates, the connection it brings the reader with larger experience; the poems become stations of the cross, with each wound ogled and slathered upon. It is messy.

One wonders what it would have been like had Plath found sufficient reason to live on, and what sort of writing she might have done with all the years she might have had. Might she become a depressed dowager internalizing each private grief to the extent that her dry skin might literally crack under pressure. Would she have abandoned poetry altogether and found religion, spending her remaining years and charisma attacking the secularist tradition? Written a cookbook? Or might she have developed a sense of humor and dismissed her early work as her own form of "rhythmic grumbling"?

The problem with short artist lives is that they usually leave behind a brief body of work, which prevents us from speculating where she might have gone with her work, or the kind of person she may have evolved into. As such, her poems and her novel are lyric agitations, occasionally brilliant, often hysterical and shrill, always at the pitch of a clenched fist pounding a trash can or a car horn stuck on it's one long, loathsome note. It's a vicarious thrill thing, I suppose, a loose-fitting necrophilia. Those sensitive souls who died young also died perfect, cut down in their prime, never given the chance to grow old, to fail at something or to betray anyone's expectations by maturing. This, I guess, is unavoidable and there's not much one can do except perhaps reacting to four decades worth of repeated hype and hoopla about Plath. What is especially aggravating has been the seduction of many a otherwise fine reviewers who've embroidered the allure of her suicide into their evaluation of her standing as a poet; it's a bizarre kind of affirmative action, in which her death and her gender and her craziness entitle her to a pass on an analysis based solely on her writing. She is, in fact, an unfinished talent, and how good she might have become is an aspect that's unknowable. Better poets have died young who haven't garnered a scintilla of posthumous adoration as Plath has. It's marketing, I think. Ted Hughes and literary agents knew they had an exploitable commodity with the deceased Sylvia Plath, and sustaining the myth around her certainly has kept the holders of her literary rights flush with money from fans who are attracted to Plath for all the reasons except the right one, a love of good work.

The Plath we know was a tragedy in one and a half acts. Enough. Put her back in the coffin, lower it into the grave, and throw on the dirt. Life isn't for everyone, and she made her choice. It is to her enduring credit that she wrote some brilliant poems despite her encroaching instability; we should read and discuss her poems and stop valorizing the condition that compelled her to leave this world.
at January 28, 2019