Genres may or may not be vanishing--I am a believer in the cultural dialectic which would have old genres collide and synthesize into new genres, starting the cycle all over again--but I do find it somewhat intriguing to consider the critic who is somewhat behind the times and yet stays in the argument. Criticism feels the continuity and discontinuity of what consumers are amusing, enlightening, or dulling themselves with; the critic who is slightly out of step is likely to be the one to puncture the more ridiculous claims of the most recent claimants of the spotlight. The older critic, the fogie still operating on values somewhat frayed at the edges, is often the one to think beyond the latest raft of buzz phrases. Genres are likely to remain with us, as humans love to give things names, and something in the spirit of manhood desires those distinctions to be made and claimed. They simply can't be wished away because a New Yorker Official Smart Person thinks they should.

"History" didn't end, as Francis Fukuyama said it would in his 1992 book The End of History and the Last Man; his thesis was that with the end of fall of Communism, history as a record of war, strife, and struggle, would end, and as relations between nations relaxed, the world would transcend ideologies and other divisions and create a more harmonies planet motivated by cooperation. The complete triumph of the free market. That never happened, and the world is arguably more problematic than it's ever been. History is still with us, and the concept of genres will remain with us as well. I don't think musicians are thinking about "post-genre" ideas when they make music, as creation is a psychological process as much as a physical one. In such the act of creation, the artist (all kinds of artists) are thinking, I believe, less about what rules they can ignore or what boundaries they can transgress. More about what they can make use of, whatever it may happen to me, however unlike, dissimilar, glaringly awkward the styles, the parts of the creation, may seem to be.

Their goal is to bring things together, whatever influences them and strikes their fancy. The appropriate it, twist it, change it, synthesize to something new, a work of art is a representation that hadn't existed before. But whatever the result, critically praised or damned, the object remains connected to history and the genres from which it attempted to abandon. This new work gets identified, described, classified, cataloged, it gets a name, it becomes a genre whose particulars are known and yet malleable within each piece the artist creates. It's an old story; in music, musicians have been genre-jumping for decades. One of my first albums was EAST/WEST by the Butterfield Blues Band, in which an inter-racial blues band took on Indian-raga/Modal jazz improvisational methods. The achievement was influenced by another transgressive innovator John Coltrane, who stepped out of his bop lineage to change how jazz was performed. The examples are endless. "Post genre," ironically, seems to be a genre itself.

As long as musicians continue to, by choice, write and record songs that fall into specific categories and subcategories--blues rock, metal, rap-rock, fusion, reggae, ska, country-rock, the whole shooting match. Genres, as we've always understood, are not dead. An obsession filters through the academic and critical universe that likes to announce that some particular form or medium is mortal because times have gotten so strange. Technology is now so pervasive that genre distinctions no longer apply and that we are now free to mix and match our tastes at will. This implies we have been liberated from some horrible tyranny; these kinds of global pronouncements have little to do with what's happening in the trenches, as it seems consumers like their genres --with the implication that there are many genres they happen to enjoy for their differences from other forms of music they happen to like-- and artists, young and otherwise, strive to maintain the various traditions meaningfully and moving while at the same time perverting the stylistic limits of the respective song forms by tweaking it with musical ideas from other areas. This, of course, creates new genres that will have cool names to describe their distinction. Nothing has died. However well specific approaches fare in the marketplace, it's not accurate to maintain we are in some area that has transcended genres. They are, in fact, thriving.

Email ThisBlogThis!Share to TwitterShare to FacebookShare to Pinterest
Labels: GENRES 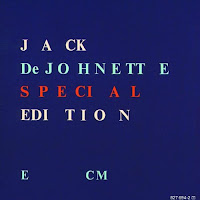 Considering the line-up on this disc- -drummer DeJohnette,, alto saxist Arthur Blythe and tenor saxist and bass clarinetist David Murray, and bassist Peter Warren--you would have thought it would have been a significant breakthrough record, one of those legendary sessions that chart new directions in the art. This ensemble, though, had no intentions of blazing any new trails, as the music stays safely within the boundaries of what we’ve heard before. He sustains the confident tone through the wildest stretches of his soloing, an unpredictable style that finds nuance and unexpected inroads in a solo space.
Blythe, on the other hand, exploits the alto sax for all it's worth, often changing moods from the whimsical and lyrical to the soulfully anguished. DeJohnette plays solidly under their playing, rumbling like Philly Joe Jones one moment, accentuating hard-rock bass·drums another, and continual-ly fragmenting and piecing back together rhythms as the music flow onward.
Bassist Warren seems the odd man. This isn't to say that this record lacks spark. Special Edition is fresh and lively, highlighting first·rate at the hands of Blythe and Murray. Throughout the disc, their instruments join in a variety of harmonic settings-the fusion-tinged "One For Eric," the rhythm and blues riff of "Zoot Suit," the ethereal texturizing on John Coltrane‘s tone poem "Indian-and at key points branch out to establish their own personalities. Murray, alternating between tenor sax and bass clarinet, offers a strong, out here, maintaining a fairly conservative attitude as he backs the others dutifully, which is to say, with vim, vigor, vitality.
at March 19, 2021 No comments:

Well, Inaugural poet Amanda Gorman for her composition "The Hill We Climb" is preparing a collection of her writing for publication with a major publisher with a tour to follow; she's garnered a deal to work as a fashion model. How is she as a poet? Honestly, it is at least as good as the best work of an advanced poetry writing class. It would be a solid B if the grading criteria were based solely on my admittedly dreadful preferences when it comes to poets. It's okay, merely okay, held back by its many flights of high and hopeful rhetoric that start to chafe as the piece progresses to the end. Yes, it sounds like a graduation speech given by the High School Creative Writing Club president.

On another matter entirely, some aged experimentalists have the idea that the Avant guard they grew on and within is where History of all manner ought to have ended. In the meantime, events, and tastes, as anyone can claim to understand them, have evolved, or at least moved on, if in circles, and there remains the idea of the Public Poet and The Poem of the Moment.

Social constructions, perhaps, but people seem to need them and believe in them and find some reason to make the make coffee in the morning because of them and dozen another reassuring albeit banal comforts. "The Hill We Climb" is a Poem of the Moment, not to my liking entirely, and Gorman is a Public Poet by any definition you care to give the term. I suspect she will transcend the Poet appellation and evolve into a (C.Wright) Millsian power player in the guise of Pure Celebrity, an influencer. Or maybe she'll become a decent writer of finely considered prose. We'll see if time allows.

So this sudden mess concerning the estrangement of Harry and Meghan from the  Royal Family, as revealed to our National Confessor Oprah? The needless distraction of the moment,  and it's likely this will find the dustbin of history  by the coming weekend. It's hard to worry about the personal sanity and happiness of exquisitely well people no matter the issues at hand--racism, sexism, tastes in music and high sugar power drinks--when the rest of the world has to go to work in the morning and fret in our off moments about rent, groceries, credit card balances. I have cared nothing about the  Royal Family, a state supported assemblage of symbolically  useless humanity who serve no useful or humane purpose, though it seems both millions of British subjects love these lavished upon wastrels and the UK Press needs them to keep their Fleet Street gossip rags and websites abuzz. Something fouler here , buried perhaps not so deep in  the population psyche, an element far more odious and evil than the simple excuse that national obsession  is simply a way for  citizens to  celebrate an institution uniquely British. The  Royals at the end of any day they live through, are a symbol of what was the British Empire, a long running foulness that had racism, xenophobia and genocide at the base of any high-minded philosophy that was used to justify the centuries old practice of subjugating non white populations. It isn't just a puppet show they're putting on here, it's closer to Civil War reenactment, were the issue of racism was close to the surface, in front of the mind,  a wish deferred for the time being. That this democracy allows this institution to thrive in full knowledge that it represents the worst sins of the Empire to this day is flabbergasting. Was anyone  really outraged, really shocked that the family was stressed as to how dark the forthcoming Archie's skin tone might be?