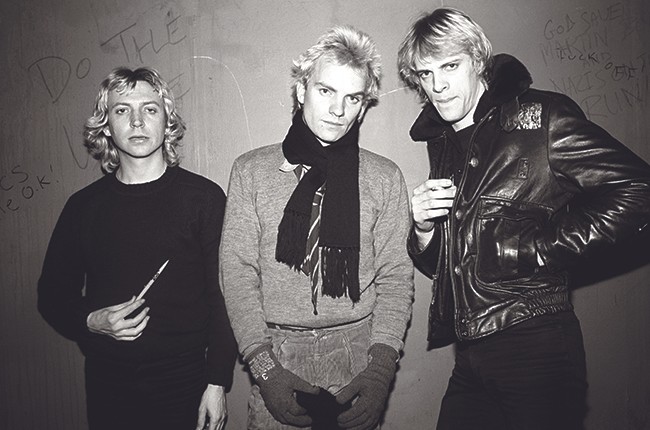 Despise Sting the solo artist; art-poseur whose only gravitas is his sense of self importance. The Police were a superb hit singles band buoyed by two other excellent musicians, Miles Copeland and Andy Summers , who were more to shape the band's sound than Sting, consigned, wisely, to lead vocals, which he did rather well, and lyrics, which were poetic without being arch.

There is always something to take these guys to task but their records from the time are on a very short list of those releases that don't embarrass the fuck out of me. And they had a short life, leaving a mere 5 studio albums for fans and new fans to glory in.

Their oeuvre is a nice, tight package of high quality rock and roll for middlebrows such as myself. Unconstrained by the other two in the band, Sting nee Gordon Sumner might have royally made their work of big ideas crushing cute by fragile pop concepts.

They died young before they could turn into grotesque, U2-esque parodies of themselves, full of themselves and corn syrup in equal amounts. And with out the frameworks provided by Copeland and Summers, which is to say the limits his ego needed, Sting has the most flush-able body of work by a solo artist who was formerly in a great band, surpassing even Phil Collins. Collins, at least, was a good drummer and could play some intricate stuff. As a bassist, Sting played his parts like they  it was an interferring with his best moves with the microphone.