The Imus Affair has been good for the cable talk shows this last week for the simple reason that it's freed any and all of the usual suspects from having to shuffling their talking points around intransigent political problems and allows them instead to opine, preen, pout, and shout over a simply grasped matter on which little or no
background information is required. 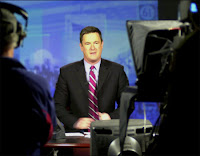 It is a food fight, yes, and many things get said in heat over an event that is being spoken off in comically exaggerated terms.
It's been good for Joe Scarborough because it's let him reassert his conservative credentials ; his point , of course , is expected, but a valid one, which is why are rap artists getting off so freely for more offensive language than Imus ever uttered?
In the heat of debate--Scarborough's show can be a shout fest much of the time--Joe wonders why the New York Times, august institution it is, blesses vile rap language as genius and genuine poetry. Scarborough makes the common mistake of assuming that an individual critic's opinion on a consumer product is an official position of the newspaper. Joe, though, would be hard pressed to find an unsigned editorial on the OP/ED page endorsing gangster rap and everything mythos it indulges in. Joe, 'though, is not a stupid man and is well aware of the difference. It's a clever way for him to bash some liberals and the NY Times to reassert his conservative credentials and
make amends for the compulsive Bush bashing he's taken to in the last year. I don't mind the Bush bashing, nor mind that he's a conservative, but it's annoying when a smart guy plays dumb with simple distinctions to build up his credibility.
at April 14, 2007