"GRINDHOUSE": a real grind, to the nub

There are few things sadder in Hollywood than watching a director's hot streak go cold , doubly sad when the freeze hits two directors in the same movie. Quentin Tarantino (Kill Bill,Vols. 1 and 2) Richard Rodriguez (Spy Kids, Sin City), coming off critical and box office hits, evidently thought it would be sure thing for them to combine their talents and mutual love of jacking up junky
film genres and give the world Grindhouse. 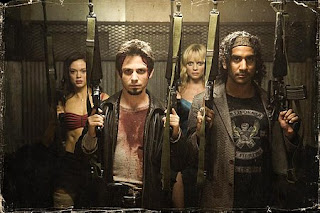 It sounded good when they batted the idea around, I'm sure; both would make an individual film as an homage to the slasher/zombie/car crash/women-in-chains flicks that used to populate downtown theaters that usually resided at the edge of the porn district, complete with scratches, missing reals, jumpy frames and melting film stock. The results are three hours of sheer send up, accidental laughs, and more than a little tedium. "Planet Terror", written and directed by Rodriguez, is a labored parody of flesh eating zombies, mad scientists, maverick Army squads, geared for maximum gross-out effect with the overflow of exploding heads, blood streams, severed limbs and oozing pustules being popped. "Death Proof" , Tarantino's offering in honor of the road movie, is talky, chatty, wordy, prolix in ways that stop being amusing and begins to
feel like the time-killing schtick it actually is. That the talk, talk, talk takes place among women rather than clubby male comfort he usually scribes these lines for is significant only in that even with women characters Tarantino reveals habit of over-marinating his best writing. At best the dialogue is naturalistic and formal without showing a strain; one easily imagines anyone of their friends who switch their dictions in midphrase without a hint of pretension. Tarantino's problem, though, is that the writing becomes the showpiece and distracts from the narrative, what there is of it. By the time we encounter Kurt Russell and his serial killing stunt car, we are simply too stupified to thread the excess of chick-chat with any underlining irony QT might have in mind, or any hint of homage or parody he'd like us to witness.
at April 14, 2007