Don Imus is a crotchety geezer who, on his best day at the microphone, radiates an incomprehensible arrogance that cannot be traced to any innate talent or knack on his part. There is nothing intrinsic about Imus--not intellect, not wit, not looks--that is admirable or worth the stale sweat naked envy evokes. His talent, as it were, is his penchant for being an asshole, of not giving a good goddamn what others think of him. What is obvious is that he's that sort who merely wanted to be famous, and didn't care what he was famous for. It paid off, to be sure, since he's been marketed as that supposedly rare breed of iconoclastic truth tellers who actually say what the rest of us are thinking." 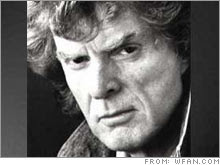 It's claptrap and marketing, and the drive time audience loved to listen to the bellicose bile and offending slurs
for those pre-dawn excursions on the freeways to the office. His bad karma has gathered against him over all the years that he's been given a pass by bosses and media critics, and his recent fall, having been fired by both MSNBC and CBS in the aftermath of his "nappy headed hos" crack about the Rutgers Women's Basketball Team, strikes me as something he might has well have been asking for. Ideally, we will have seen the last of this frowning scarecrow and the rest of us can get on with things that actually interest us.But no. The story isn't going anywhere, and the experience of OJ, Michael Jackson and the debacle of Anna Nicole Smith staying for ceaseless, seamless, unending periods of time on our broadcast and cable talk shows remind us that American media is addicted to celebrity , obsessing over it as if it
were a religion,a metaphysically fixed certainty. The issue of racism and misogyny and other offenses are no longer the point; everyone wants to get their say in, everyone with half a a foot in the door of Fame wants to be associated with this farce, to the extent that the bad faith is boundless. Al Sharpton's fiasco with the Tawana Brawley and Jessie Jackson's referring to New York as "Hymietown" are not forgotten, but they aren't mentioned as the two of them bray and pontificate about injustice and all manner of foul words and deeds. The injustice, though, is that everyone having their say, even if what's uttered only mirrors that thing they claim to find abhorrent.
at April 12, 2007