"Poetry" by Marianne Moore: the craft for the Sisyphus in all of us 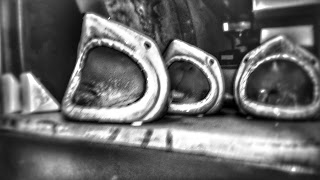 Slate poetry editor Robert Pinsky gives readers Marianne Moore's widely anthologized "Poetry" as a topic discussion a few months ago. It was a a joy to read again/It shouldn't be a mystery as to why this poem among the hundreds she wrote is the one that an otherwise indifferent audience remembers: it's a poem about poetry. She rather handily summarizes an array of cliches, stereotypes and received misgivings about poetry a literalistic readership might have ,feigns empathy with the complaints, and then introduces one crafty oh-by-the-way after another until the opposite is better presented than the resolution under discussion.

This is not a subject I warm up to in most circumstances--poets, of their accord, have demonstrated the sort of self-infatuation that many of them, left to their means-to-an-end, would remove themselves from the human scale and assume the ranks of the divine, the oracular, the life giving, IE, develop themselves into a priesthood, the guardians of perception.

Moore's poem, though, presents itself as a contracting string of epigrams that seem to quarrel, a disagreement between head and mind, body and spirit, and a larger part of her lines, as they seemingly across the page away from the statements preceding the line before it, is that no really knows what to make of poetry as a form, as a means of communication, as a way of identifying oneself in the world. It frustrates the fast answer, it squelches the obvious point, poetry adds an ambiguity that would rile many because of lines that start off making obvious sense but which leave the reader in a space that isn't so cocksure. Little seems definite anymore once a poem has passed through the world, and the reassembling of perception required of the reader to understand a bit of the verse (the alternative being merely to quit and admit defeat) is bound to give a resentment. It's a headache one would rather not have. Moore's poem seems to be a response to Dorothy Parker's ironic declaration declaration "I hate writing. I love having written". The reader may hate not understanding what they've read, but love the rewards of sussing through a poem's blind alleys and distracting side streets.

I, too, dislike it: there are things that are important beyond all this fiddle.
Reading it, however, with a perfect contempt for it, one discovers in
it, after all, a place for the genuine.
Hands that can grasp, eyes
that can dilate, hair that can rise
if it must, these things are important not because a

high-sounding interpretation can be put upon them but because they are
useful. When they become so derivative as to become unintelligible,
the same thing may be said for all of us, that we
do not admire what
we cannot understand: the bat
holding on upside down or in quest of something to

eat, elephants pushing, a wild horse taking a roll, a tireless wolf under
a tree, the immovable critic twitching his skin like a horse that feels a flea, the base-
ball fan, the statistician—
nor is it valid
to discriminate against "business documents and

school-books"; all these phenomena are important. One must make a distinction
however: when dragged into prominence by half poets, the result is not poetry,
nor till the poets among us can be
"literalists of
the imagination"—above
insolence and triviality and can present

for inspection, "imaginary gardens with real toads in them," shall we have
it. In the meantime, if you demand on the one hand,
the raw material of poetry in
all its rawness and
that which is on the other hand
genuine, you are interested in poetry.

The agony, the contradictions, the dishonest sleights of hand that deceive you in the service of delivering a surprise, an irony, an unexpected image , all of this is worth resentments a readers suffers through. One is , after all , made better, made stronger by the exercise of the will to read and confront the poem on it's own terms. Moore is a shrewd rhetorician as well as gracefully subtle poet.Clever, witty, sharp and acidic when she needs me, Moore is clever at playing the Devil's Advocate in nominally negative guise, saying she dislikes it but mounting one exception to the rule after another until we have an overwhelming tide of reasons about why we as citizens can't exist without it's application.

It works as polemic, indeed, crafted as she alone knows how, and it adds yet another well-phrased set of stanzas that want to turn poets into more than mortal artists, but into a priesthood, a race of scribes attuned to secret meanings of invisible movements within human existence. It sort of stops being a poet after the first jagged stanza, not unlike all those pledge breaks on PBS that tirelessly affirm that network's quality programming while showing little of it during their pleas for viewer money. It's not that I would argue too dramatically against the notion that poets and artists in general are those who've the sensitivity and the skills to turn perception at an instinctual level into a material form through which what was formally unaddressable can now find a shared vocabulary in the world-- egalitarian though I am, there are geniuses in the world , and those who are smarter and more adept than others in various occupations and callings--but I do argue against the self-flattery that poems like Moore's promotes and propagates.I wouldn't regard this as a polemic of any sort, nor a manifesto as to what the writer ought to do or what the reader should demand. Reading it over again, and again after that makes me think that Moore was addressing her own ambivalence toward the form. After one finishes some stanzas and feels contented that they've done justice to their object of concentration, some lines appear contrived, other words are dull and dead sounding aligned with more colorful, more chiming ones,an image seems strained and unnatural, an analogy no longer seems like the perfect fit.

She too dislikes it, I think, because poetry will always come up short of getting to the world without our censoring buffers; Wallace Stevens solved the problem of cutting himself from the gravity of his real life by no attempting to launch his persona , via metaphor, through the imagined barrier between our perception of events and what is there, sans a mediating ego, and landed himself among his Ideal Types, his Perfect Forms and Arrangements, but the strength of his language. The metaphor he would have used to address qualities otherwise unseen of a thing her perceived became, in his method, the thing itself, a part of his Supreme Fiction. William Stevens voided the decorative phrases and qualifiers that he felt only added business to the world a poem tried to talk about and made a verse of hard , sharp, angular objects. Moore, though, seems to insist in Poetry that however grand , beautiful and insightful the resulting poems are in a host of poetic attempts to resolve the problem the distance between the thing perceived and the thing itself, we still have only poems, words arranged to produce effects that would appeal to our senses that are aligned with this world and not the invisible republic just beyond our senses. Poetry is a frustrating and irritating process because it no matter how close one thinks they've come to a breakthrough, there is the eventual realization of far one remains from it. Poetry as Sisyphean task; one is compelled to repeat the effort, and not without the feeling that they've done this before.

The commotion of the animals, the pushing elephants, the rolling horses, the tireless yet immobile Wolf, seem like analogues to restless mind Moore at one time might have desired to have calmed by the writing of poetry. There is the prevailing myth, still fixed in a good number of people who go through various self help groups, that the writing of things down--poetry, journaling, blogging, writing plays or memoirs--is a process that, in itself , will reveal truthful things one needs to know and thereby settle the issues. Writing, though, doesn't "settle", finalize or cement anything in place, it does to set the world straight , nor does it resolve anything it was addressing once the writing is done with. It is, though, a useful process, a tool, one may use as a means to get one out of the chair, away from the keyboard, and become proactive in some positive way.

The expectations of what poetry was supposed to do--create something about the world that is permanent, ever lasting, reveal a truth who's veracity does not pale with time, whether a century or hour-- are crushed and a resentment when realizes that the world they're attempting to conquer, in a manner of speaking , will not bow to one's perception, one's carefully constructed stage set where the material things of this earth are props to be arranged on a whim, and that the mind that creates the metaphors, the similes, the skilled couplets and ingenious rhyme strategies is not calmed, soothed, serene.

The world continues to move and change, language itself changes the meaning of the words it contains, the mind continues to tick away, untrammeled. Moore's animals, in the restless paradise , are themselves restless, non contemplative, instinct driven toward species behavior that is about propagation and survival, creatures distinct from the contemplative conceit of the poet who thinks he or she is able to sift through the underbrush for secret significance. I've always heard a weary tone in Moore's poem; a mind that in turn wrestles with matters where poetry doesn't reveal what's disguised but only what the poet can never get to. Her poem echos Macbeth's famous speech rather nicely:

She should have died hereafter;
There would have been a time for such a word.
To-morrow, and to-morrow, and to-morrow,
Creeps in this petty pace from day to day
To the last syllable of recorded time,
And all our yesterdays have lighted fools
The way to dusty death. Out, out, brief candle!
Life's but a walking shadow, a poor player
That struts and frets his hour upon the stage
And then is heard no more: it is a tale
Told by an idiot, full of sound and fury,
Signifying nothing.

She seems not a little dismayed that poetry is only part of our restless species behavior and that the language we write and expound to bring coherence to the waking life are only more sounds being made in an already noisy existence.
at February 21, 2010