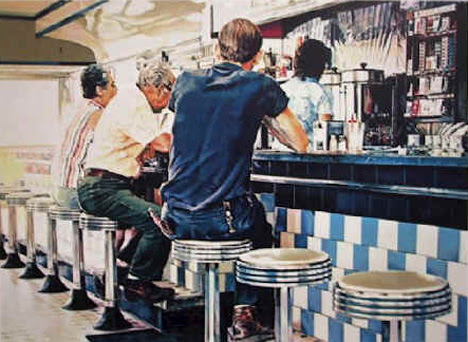 Little Denny kept sliding off the lunch counter stool. The waitress poured his mom another cup of coffee.
The waitress laughed, a snorting giggle.
“That's cute” she said, turning to look at Mom, a young woman in her mid twenties who'd peering at a magazine while fidgeting with her food. She slapped her sandwich on her plate and grabbed Denny's arm.
“Shit” she said, her voice a irritated hiss, “he's doing this on purpose, the rat-“
“OwwwwwwwwwwwwWWWWWWW” yelled Denny when she yanked him upright on the stool, forcing into an impossible posture. His face met the edge of the counter half way,
where he could see a history of dried and chipping wads of gum mark the rim like mountain ranges on three-dimensional globes. The hamburger Mom ordered for him sat on its plate in front of him, a mountain of meat and sesame seed buns.
“Now eat” his mother demanded. Her long finger that had been leafing through the magazine pointed to the plate, looking crooked, shaking, with a long, twisting fingernail curling toward the charred patty as if to drop something from a claw. Denny cringed again.
“Eat” she said again “eat and quit fucking around.”
The waitress's smile shrank to a chastised `o' from his bulging , full-cheeked glory, and turned to chores , her own business. She pulled half empty ketchup bottles from a shelf under the counter as Denny reached over the chasm between he and the counter and grabbed the hamburger from the plate. It was the size of a football in both his hands. Squeezing it tight, he raised it to his mouth and then turned his eyes to Mom in order to see if she could see him doing exactly what he was told, a mature boy of 4 and a half!
Mom was sipping her coffee, the sandwich on the plate with two bites out of it, staring at the waitress who was pouring the remains of the ketchup bottles into a single vessel, so to waste not a drop. Denny squeezed the burger so tight that the patty slid from between the buns and hit the floor with a wet slap that sounded like a kiss heard in rowdy cartoons. The phone rang, and when the waitress reached over to grab the line, her arm swept into the bottles and knocked them to the floor. The bottles shattered into a hundred red, bloodless shards. Startled, Mom spilled her coffee.
Little Denny fell off the stool.
at June 08, 2009