A few good words for Mick Jagger, and the Rolling Stones, not in that order 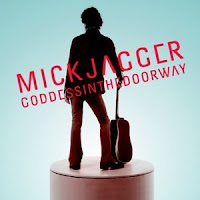 Mick Jagger has amassed a troublesome track record with his non-Rolling Stones projects, the aged rock icon turning out indifferent solo albums, film performances, duets, the whole shot. The obvious is now clear even to the most ardent Jagger partisan, that the good man's musical instincts have found best expressions in his partnership with fellow Rolling Stone Keith Richard. Richard seems the real musical genius behind this band's amazingly resilient body of blistery, wickedly cynical rock and roll, and it's due to him, I think, that they continue to release strong albums decades after their supposed "peak"; 2005's A Bigger Bang caught me by surprise when I first played it. The trade marked weave of cranky, thundering guitar work by Richards and second guitarist Ron Wood fused quite ably, brilliantly even around a set of riffs assembled with a jeweler's touch, Jagger's vocals, a signature mix of whimpering sobs and bull-moose roars, underscore the album's unifying tone of hard-knocks hindsight and pampered fatalism,and Charlie Watts' drum work kept it simple, hard, steady. This album is the sound the Stones have been famous for, turned into a refined signature art, the sense that there is a huge apparatus of attitude and consequences teetering and about to fall forward, the sheer weight of gathering gravity picking up speed, velocity, undeniability.

Jagger, though, did have one album , from all his years of attempting to create a musical style independent of the Stones, where his instincts find a comparable format; as with the case with Richard, the success of the disc has to do with who he partnered up with. In this case, it's Lenny Kravitz, on Jagger's 2001 album Goddess in the Doorway.What makes i Goddess In the Doorwayworth the purchase is the fact that Jagger is singing better than he has in quite a spell; gone is the bellowing that characterized the corporate feeling of the last two decades of Stones releases, replaced with performances that underline the fact that while Jagger may be technically a poor singer, he is a supremely gifted i vocalist. The distinction is key, if only to say that a singer is someone who can hit the notes of a melody with trained technique, and maybe, just maybe manage something of a human personality, punchy and unpredictable, to come through the purely rounded tones. Jagger, with fellow mewlers Dylan, Bowie and Tom Waits among others, work brilliantly within their shredded, imperfect limits as front men. Jagger again sounds alive and tuned to the screwy grooves of the tunes.

Musically, too, the album is strong, with the electro-vibe of "Gun" percolating nicely under Jagger's faux-sinister snarl and grunt, and the riff-happy "God Gave Me Everything I Want" is slam-dunk of a hard rocker, with all the crashing guitars from Lenny Kravitz bringing several generations of attitude-fueled chord bashing to bear against a four-square drumbeat. Jagger's vocal quite literally howls and twirls a keen elbow to the rib , and offers a brief , blasting, well situated harmonica riff toward the end that manages more impact than any number of witless John Popper solos.

Sorry to say that the effect of all the good sounds here wither when one confronts the lyric sheet, wherein Rock's supreme ironist and cryptic cynic par excel lance sinks below the surface as he struggles to come with something resembling real, genuine, heart felt emotion. It's a tedious assortment of greeting card, web-page poetry where every unexceptional expression of love and it's fractured derivatives finds room in these other wise agreeable tunes. Jagger hasn't a talent for reflection, or for writing about others who are dear to him; his stylized narcissism is too entrenched.
at June 10, 2009