"Walking in Fog" by Barry Goldensohn 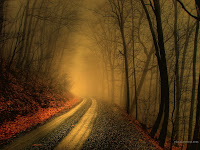 Fog has its appeal because we’re interested in the idea of a nether world coexistent with our own, where things are less definite, less material, able to appear and vanish into other details , or into vapor altogether. It’s a filter over the hard edges of what we see and take for granted and perhaps even curse for being solid, precisely drawn, an arrangement of three dimensional things we have to walk around, not through.


Walking in the fog, through the woods is what Barry Goldensohn fancies with his poem “Walking In Fog”, a jaunt that has one feeling that one is walking through unforgiving barriers, penetrating unseen membranes.

There’s that twilight , near dark feeling of the world one knows becoming vaporous and and translucent, less fixed on names and definitions that are written down and conveyed by way of essay and routinely complicated system-making, and which seem more as ideas in themselves, the notion of things that hover over our straight forward lives whispering subdued captions of what our lives and our contexts are like free our fear of not having enough or losing what we have.

Goldensohn’s trek through the forest,through the signifying fields, has something in common with the dyes of a madras shirt; everything ,from detail to the slightest glimmer of joy or foreboding trilling lightly at the delicate edge of the paradigm, it all bleeds together.


Everything looms at me. Hound's-tongue
with wet doggy leaves and blue flowers
starts up from the mist-streaked hillside.
Standing by itself, framed in fog
the live oak twists black arms above me,
an embrace, free of the crown of leaves that hides
the outlines of limbs in the crowded background view.
The canyon and the next hill disappear.


There is a dream logic at work, not the rational cause and effect a more stainless-steel mind requires, but instead the logic,intuited sense of how elements fit together; Goldensohn has an especially balanced poem here, the physical details veering toward the surreal but never escaping the atmosphere so as the poem is made turgidly weird and overwrought with metaphors that might have sank the poem.

There is , with sincere thanks, a lack of explanation about any of this means, and the power of the poem draws from the way things appear and vanish in this verse, from looming branches and wet leaves; things emerge as one comes closer, things that one has just past vanish into the cottony mist. There is the feeling of being drawn in, embraced by all that one sees; animals and their habitats . I come away with the feeling of being absorbed


Plunging into dense puffs and gusts of fog
along the road a dying friend wheels
and lunges from cliff wall to cliff edge
in a bright yellow blouse and blue jeans
joyous with losing herself and coming back
in daily magic, you see me then you don't.

It comes to death, of course, the fascination with it, the thinking of whether this life is worth the struggle and the pain and the sheer labor just to be current with one’s accounts and relationships, and the thought does arise among many of us, musing at twilight, at dusk or dawn, in fog near the cliffs where the songs of sea maidens and powerful water gods offer their promise of rest and deep, coral toned symphonies, that the transition from this life, the hard life, the life where everything has density and measurable weight, to the life where gravity takes no toll , would be simple, ease, painless, natural beyond nature. The final image of the dying friend wheeling herself to the cliff edge, decked out in a bright blouse as she considers going over the edge and then returns from the fog, as if by magic, caught me by surprise, it stopped me, it fairly stunned me.

Writers, the sort we like to discuss, the introspective and the thoughtful and the perennially worried, are most comfortable on the smooth, stainless steel surface of given meaning, but they (we?) are cursed (blessed?) with the impulse of analysing where they stand, why, and how it might be otherwise if there rules of gravity weren't an imperative.

The speaker here is someone noticing how things familiar and commonplace appear to be at once ethereal and somewhat supernatural given the change in atmosphere, light; the density of things gives way to diffusion and there is the feeling that you're walking through the material world and travelling great distances in no time at all when you stroll through the forests; our narrator observes what things appear as, notes the change in a personal psychology, the rise of feelings that have to explicable basis, but never gives way to the seduction of his mood.

He is firmly rooted, and wonder as he might about another plain his language is inadequate to describe, he remains on the soil he landed at birth. He has much he wants to do, and hasn't the hankering to consider other options; the wheelchaired friend, though, has the luxury to wonder, to play games as described, coming so close to a mystical abyss only to back away from it's yawning gasp. Giddiness is the mood, finally, the thrill of having trekked alongside certain fatality only to walk away from it, if only by mere inches. It is one of the benefits of not taking the Leap, the reminder that one is alive without doubt when every sense is going off like fire alarms.


The fog, with what its qualities suggest about being a portal to some greater realm above our own, is something we journey through, absorbing the associations, daring to think of a life free of the dreariness of making a living and keeping your word and thinking perhaps further that passing on would be so bad, and then coming back, an aberration in the mist, slightly crazed, energized, fresh from the fox hole, ready to shoulder the weight of the world one was birthed into, realizing there are still some things one would like to attempt before presenting a boarding pass.
at September 02, 2008