Miami and the Seige of Chicago.

We've all heard the remark used too often to describe an egocentric's prerogative to to be self-consumed and reticent to acknowledge the rights and opinions of fellow citizens: " It's his (her)world, we're just living in it..." There are infinite variations and elaborations , all headed for the same punchline no matter the navigation the teller chooses, with hardly an improvement on 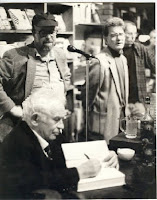 the insight. The phrase, in fact, is stale and in need of retirement.

The phase had been used recently in a chat I had recently with someone regarding the re-release of Norman Mailer's account of the 1968 Republican and Democratic Conventions, and the mention made me want reach for the imaginary lever for the equally imaginary trap door down which the utterer of petrified phrases would fall, the bottom chamber of which they would remain until they appreciate that cliches are no substitute for an original aside, a choice metaphor, a wild ride of associations that prove that one has been paying attention to the events about them. Paying attention is precisely what the literary journalist in his nonfiction writings, and what Miami and the Seige of Chicago (blessedly reissued by NYR Books)shows is that for all his self-obsession, Mailer was no mere narcissistic punk considering the world his realm and its inhabitants his subjects. What gives the narrative its tension is Mailer's knack for addressing the world as he thinks it used to be what it ought to become and then confronting blunt facts that won't bend to his wishes, give in to his whims, follow a script he might have written. Mailer is a counter puncher, to use his parlance, someone who reacts with a mind that brings details , thesis and counter thesis , call and response into spinning loops of image-saturated language. Miami/Seige , like a good amount of the nonfiction Mailer wrote during the sixties and seventies, is a richly nuanced , feverishly grandiloquent mid century reversal of Whitman's latter day desire to contain multitudes and find himself in each breath , phrase and circumstance of every American's story; Mailer, an early idealist who wanted to forge a revolution in the consciousness of the nation, as he announced in Advertisements for Myself, refuses bitterness and despair when his designs become moot and embraces ambivalence and irony instead. This makes for a desireable place from which to wrestle with the things that irritate his senses and insult his intelligence.
at August 31, 2008