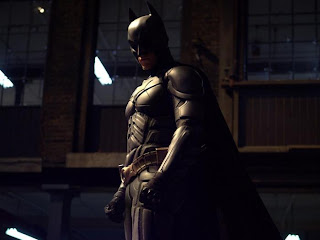 I was wondering if DC Comics would ever deliver a counter punch to the glut of comic book movies arch rival Marvel Comics has so far managed to bring to the screen, and now, on the eve attending the San Diego Comic Con, I have my answer, The Dark Knight, directed by Chris Nolan. It's earned over a $158 million dollars on it' first weekend, blowing away the previous champ, Spiderman 3 , and may well become the biggest earner of the year. What did I think? Well...I rather liked the movie over all, but my basic complaint is the one that plagues nearly all Hollywood films these days; The Dark Knight is simply too long. One has to admit that there is little slack time here and that all the materials coming at you are part of an intricate and dense weave, but the attempt to compensate for length by having a brisk pace results , if not torpor, then monotony. Would if director Nolan had paused and let Batman, the Joker and the lot perform their drama agains the glorious architecture and neighborhoods that are Chicago; racing through them makes one feel cheated visually, giving you the effect of trying to see a city while driving through the city after dark on the freeway leading out of town. The additional padding comes with the character of crusading DA Harvey Dent, who's commitment to clean up Gotham City has Batman more or less grooming him to assume the mantel of being the town's symbol of law and order. The tension between he and Bruce Wayne/Batman for the affection of the same woman would've been compelling enough, but having Dent morphed into Two Face and become an an aggrieved avenging angel, replete with gimmicky suit, is bloat.Aaron Eckhart’s performance as the pre-disillusioned Dent is so effective to the narrative drive that I wouldn't have had the character disfigured and made over into an insane villain in the same movie, saving the Two Face saga for another movie. The final was flat, pat, predictable. Plot management seems to be a challenge for director Chris Nolan, and one wishes there had been someone around advising him to condense when he should have, to slow down when he could have.
at July 23, 2008

Email ThisBlogThis!Share to TwitterShare to FacebookShare to Pinterest
Labels: Movies, The Dark Knight