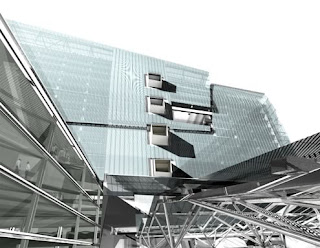 Architecture is an art form, but of course, but the crucial distinction between this art and other mediums is what the consumer, the perceived, the witness to the art work can do when confronted with works that are, say, unsatisfying. One can walk out of a movie they dislike, they can walk past ugly paintings without relinquishing much linear feet of space, they can not buy books by authors or poets they find not worth the time, and even massive sculptures, as in Richard Serra's obese steel curtains, can be removed from the public space they bother. But architecture? Great and ugly buildings are both things that are more or less forever once they are constructed; in either case one hasn't the option to ignore them. A structure can either be the greatest gift to a community or the vilest curse on it's horizon. Thom Mayne's new U.S.Federal Building in San Franscisco is the case in point; Architecture critic and historian Witold Rybczynski offers an even handed critique in his current Slate column/slide show, and I do wish I had his sage-like repose. My recent view of it provoked something less generous.It would've be interesting if someone who actually had to work in the proposed building five days a week were involved in this building's planning. Assuming that each of Mayne's notions and details would be explained to a potential group of structure inhabitants, the architect might have received the sort of feedback , practical, technical, aesthetic, that would have prevented the Federal Building from being another whiz-kid vanity project constructed with public money.

But alas, there are the lingering traces of Howard Roark's fictional fingerprints all over the self-image of many a star architect; even with the requirements that the project meet budget deadlines, structural codes, and conservation requirements, the structure will all the same sacrifice the petty concerns of practicality and beauty for whimsical design innovation that , although reputation making, age badly, look tawdry and contrived over time, and are more imposition than benefit to the community they are built in.
I've recently walked along side this structure this past week and the experience is , say, less gratifying than walking past a boarded up store front. I had the sensation of being crowded off the sidewalk, or worse, of feeling compelled to try and outrun an avalanche. From street level it is a grey , densely packed leviathan that promises a hard road ahead, a bleak and desolate future for the civic population that dares to remain in cities; from afar it resembles nothing so much as a collection of remote control devices that had been taken apart, bashed with a hammer, and reassembled with two bottles of Super Glue.

One reads continually in interviews and in scholarly critiques that the capital "A" architect desires and is compelled by unreasonable muses to challenge the citizen and force them into various dialogues, inquiries, inquests and critical examinations of their relationships with shapes and forms, the purpose , I suppose, to coerce the mere resident and worker to confess that any expectation of graceful and efficient buildings in crowded centers are a bourgeoisie indulgence . The agenda buried here isn't just the glorification of the builder who sees himself as social engineer, but to diminish the stature of the citizen from whom all power flows from; symbolically the building informs us rather plainly that the electorate's consent be damned. Albert Speer would nod and give a knowing chuckle if he observed the grandstanding disarray constructed on the San Francisco site.I couldn't help but think that Thom Mayne's realized this too and was somewhat giddy thinking that he was getting paid by the same public his new building would vex.
at July 23, 2008

Email ThisBlogThis!Share to TwitterShare to FacebookShare to Pinterest
Labels: Architecture