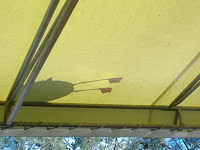 Time was in the seventies and eighties when I had an exceedingly high opinion of my opinions about poetry, literature, movies, and music, and it followed that during the period I would share my opinions with you as to the aesthetic merits and sins of what cultural agents were trying to sell us. Rather, it was more like I was telling you how the world work or why it didn't work; I wasn't a philosopher, a politician, or priest. None of that. I was something better, a critic. My reviews were in the Reader, The Door, The UCSD Guardian, Kicks, The Triton Times, The Paper, tabloid pages were my means to have a say on lyrics, fumbled organ solos, botched metaphors, I was in love with my own voice as it said sour things about a whole lot of people places and things.

Not that I've come any more modest with time, but I've calmed down some since taking the pledge; being a drunk for twenty years with the arrogance I held onto is looping mindset that kept me drunk. Not to wander into a drunkalog here, but let us say that my phone stopped ringing, my prose was incoherent, my poetry naught but an angry page of typos. Getting older and sobering up, I'll say, are the best decisions I could have made under my reeking circumstances. It's a miracle that I was able to make the decision at all.

Well, here we are again, another pair of special occasions come and gone, and still, the novelty of turning 56 on my birthday and the celebrating a 21st sober anniversary hasn't worn off. When I was younger, in my thirties, this arrangement of back-to-back touchstone dates were my primary bragging rights, something I would share, no, declare to each stranger, work mate, attempted girl friend and luckless traveler. It became a standardized rap, a memorized monologue about miracles, phoenixes arising from stirred ashes, cruelties, indignations and various cheats against daily ethical limits, and the sure deliverance a horrible biography needed.

Sure enough, I was impressed with the results I'd experienced as a result of laying aside the bottle, but I was word drunk all the same, and often times a bore. With every success in work, love, career, with each disaster or middle state of the same, sobriety was my boilerplate, spirituality was the punch line, and the signature phrase was my length of sobriety was the number of years I was beyond my life expectancy. The miracle sounded canned, in other words, and I could hear myself going through my paces as if I were the person I was talking at (as opposed to speaking with).

Even I couldn't deny the staleness of the best phrases, how slack the cadences and rhythms had become. It was something I couldn't spice up, juice up, liven up no matter my efforts; the only thing left to make it interesting to dwell on such matters aloud would be to make things up, that is, to lie, but that was contrary to the point of staying sober in a fellowship constituted on a spiritual cure for my hopeless situation as someone who couldn't stop drinking by his own power. So I a sat in the back of the rooms where folks like me gather night by night, listening hard, making it a point to ask how other people were doing, letting them finish their answers ; the hardest part of this project to take a genuine interest in others was refraining from offering up my own version of the anecdote they might have shared, and to avoid giving intense forms of unsolicited advice on what they ought to be doing with their problems. Surely, it was a humbling experience realizing that those around me weren't problems to be solved or ills to be cured, but rather people with live no less difficult and no less blessed than my own. At 56 and 21 respectively, I think I might be getting the hang of that simple notion.
at July 21, 2008