At least play some better music 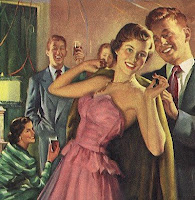 Last Friday night, noise, random bleats of bass lines and cursing twenty-year-old males drunk in apartments by the Pacific Ocean, burning away the night with tequila and swear words. It's all I can do from climbing the stairs and slamming a fist on the door, screaming a rude word from the many I know, demanding quiet, silence. Pacific Beach, just south of LaJolla, is the party town of San Diego County, a collection of streets that are a characterless grid of box houses and gross condominiums that crowd the shoreline of rock and gravel that have replaced what used to be a white sandy beach. Drunks, homeless and crazy people stack themselves on top of one another in this peninsular wedge, and between those moments of relative calm and sanity, there is always something to contend with, some vague threat that dogs you into your sleeping hours. The nighttimes becomes a noir cliche. You walk past businesses lit up with flickering neon lights spelling out words like "LIQUOR" and "LAUNDRY" or "CHECKS CASHED" in deadpan, sexless fonts, you're absorbed by an unblinking darkness, instinctively crouching, shooting a side glance at the alleyway you're treading past, past a dumpster caked with the smear of bar closings and unfinished meals. The dumpster is pressed against a cement wall honored with graffiti words of alien neighborhood lingo and concert posters that have been torn, pissed on, as forgotten as the musicians of the bands they advertise. The hiss of tires arises from a grove of trees whose branches form a canopy over the black street your walking, there is the rapping tap of footsteps not your own. A car door closes with a faithless slam. Tommy James coos over his hanky panky as the car cruises, all headlights white, red and blurred. None of that. I'm not in the mood to have my face punched in, though most of the time these amateur drunks defer to my gray hair and the grit in my voice that reminds them of their dads, no doubt, and fall quiet after some apologies and other gestures to restore the eternal serenity that was formerly part of the weave of darkness. Instead, I look at my watch again, and again it says that it's after two in the morning. I look up to the window where the voices are coming from. Screams, goddamned screams, names against dad, something about a goddamned fucking piece- of- shit table being broken. My neck hurts as the voices climb an octave and break on the weakest syllable; this is the border between hysteria and hilarity. The wind creeps along the sidewalk along the courtyard I stand in; I'm wearing no socks and my feet are cold, numb by now. One of these young men is crying. Shadows cross the room, silhouetted against the drapes. There is that flat, smacking sound of someone doing a high five with their best buddy who doesn't quite have the knack of pounding the flat of their palm against the calloused palm of another. Sometimes I wonder why I quit drinking if what's left for me is to listen to the results of other sons of jerk offs squander a good buzz with clotted rage and self-pity.