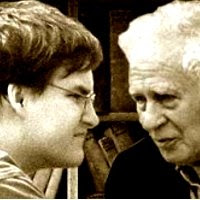 I believe it's important for anyone who desires to write to write everyday , for no other reason other than maintain the discipline of composing something even when there is no inspiration nor the germ of an idea. Norman Mailer commented awhile ago that he maintained his regimen even on the worst of days because he needed to hone a style and so become better player of his instrument; I suspect wrote each day because it was important to him to realize how potentially bad he might sound while in pursuit of a suitable voice for the project he might have been working on. It seems to have worked well for most of the near sixty years career he had a professional writer.

We ought to note that Mailer, good or less good, never sounded like anyone else stringing words together, something that can't be said for Brian Thompson, writing yesterday at Chud.com . Titled "Mailer=Hulk", Thompson attempts a big of digressions and asides trying to find a common theme that might exist between Mailer's writing and the rebooted version of The Hulk; this is where we learn that while it's important to sit down and type out something no matter how good or bad, a writer should have the honesty not to publish every small matter they happen to spell out. Babbling in print is babbling all the same, and Thompson informs us that he had known the late author and had to slap him around because Mailer had crossed him, straining to mention matters of rage, masculine grace and the potential of violence to release truth and beauty in human affairs. It's not that these sorts of fantasies aren't needed consider the kind of mythology Mailer created for himself, but Thompson's effort is unremarkable and , well, dull. I'm thinking of the penultimate spoof on Mailer in Alan Lelchuk's brilliant novel American Mischief. Among other matters, a drunk Mailer offers a psychotic professor Bernard Kovell a chance to sodomize him, where upon the professor, aswim with Mailer's theories of murder and such in his essay The White Negro, crams a gun in the fictional Mailer's anus and pulls the trigger. The real life Mailer wasn't amused at the time, and sued Lelchuk for libel.

Thompson has read Mailer, it seems, but perhaps not closely enough. He writes

I leaned over his typewriter. “'The White Negro?'” I asked. “That's completely nonsensical.” His thighs nearly burst his purple jeans. His temples radiated Kirby dots. “I AM PROVOCATIVE!” he screamed. I barely realized the hot bath towel had been torn from my hands before he wrapped it around my neck.

It's late in the day for someone to attempt to parody Mailer now; what can be lampooned, exaggerated, made grotesque in his life has been done over and over through the decades, done so often , in fact, that even Mailer haters tired of hearing the same old complaints and defects brought up yet again, and again, and still again. He outlived his harshest critics and now the unthinkable has happened, one must consider the relative merits of the novels, journalism, plays, essays, criticism and screenplays he wrote over six decades. Thompson , though, seems to resent the fact that he never took on Mailer in any meaningful way and hastens to dust off the old insults, recycle the tired formulas.The satire arrives stiffly here, but while one might debate the worth of The White Negro as philosophy, it should be noted that Mailer composed the essay in long hand, having sworn off typewriters after writing his second novel Barbary Shore. The pencil was his preferred instrument. Michael Lennon, Mailer's friend and archivist, was kind enough to post that to this blog a year ago.
at May 24, 2008