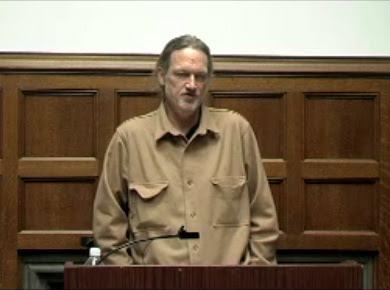 When he's on his game, Jim Powell has a finely tuned ear for voice, place and period, which we can see with his poem "The Seamstress", which can be read here in Slate. A good poem, as it goes, nothing special in the long run, but Powell does a neat and not-so-obvious job of creating parallels between a holiday that commemorates the dead and keeps their memory alive (and in so doing preserving some order in the minds and morals of those remaining alive), and woman trying to bring a decorative skeleton figuratively "to life" so it might add impact and meaning to the celebration. Powell is rather good at implying that it is all for naught, under the noise and decoration; the dead will remain in their graves as dust in spite of collective conjuring, and the skeleton will just continue to look limp and tattered, a rattling assemblage held together with costumy thread and brocade. And so it sits as well with the seamstress, herself old, creaking at the joints to finesse a stitch, squinting in the night light as the seams get wider, less tight, loosened with age. Her bones ache, her eyesight fails by degrees, the skeleton is a limp and tattered symbol whose power has waned and meaning has lessened to the level of Saturday morning cartoon, and the dead themselves are even more deceased than they were before, memories of their existence buried under the same ground the children dance upon other than that children love to the dance for any reason or no reason at all because being alive is only its most fun and enthralling at those times and moments when there is no knowledge of limits, of what you can't do or what can't be done. Powell's poem "First Light". What about it?Perfectly suited for a slice-of-life poem, an observational piece focusing on the workplace, though it's problematic that the job described turns out to be in a bakery, a lone baker just beginning his workday before light. The situation is a shade archetypal, and what is noticed in the lines "tufts dusted with a snow of flour", and especially "thick arms cradling rolls and crusty loaves, a gift for late-returning revelers..."for the derelict who washes in the creek under the bridge his daily bread at daybreak come off more as wish-fulfillment than an inspired vision.

The setting is too ideal, everything that you would expect to be in an early AM bakery tableau just happen to be there, right down to the homeless man who picturesquely "washes his hands under the bridge". The stops being a poem at this point and become instead one of those faux Impressionist paintings of Parisian cityscapes in the late nineteenth, early twentieth century, filled with blurry, alienated figurines in their shops and on the slippery hued streets going about their anonymous chores. There is an idealization in this well-crafted piece that strikes me as wrong and inappropriately dreamy. This may be because Powell gave us one painterly detail too many in this hyper-literalized diorama. Had he omitted the line "under the bridge" -- the problem is that bridges and rain are ever so ready poetic words to use when inspiration falls midline -- and substituted another tactile element, something plausible , recognizable yet unexpected (garden hose, a playground water fountain, a janitor's mop, something that could credibly be in the scene), the poem may well have worked. Even so, one expects something more to be said about this situation than the idea that it's swell , dreamy, and meant to make you go "oooooooohhhhhhh" and "ahhhhhhhhhhhhh". There is an underside here that is ignored, and Powell shuns an urge to get beyond his cozy poetics to discover something remarkable, disturbing, and finally memorable. As is, this poem is not unlike those previously mentioned faux Impressionist paintings, which are produced by the hundreds for tourist dollars. Powell's poem reads as if he's written dozens of variations on it. That isn't writing, it's merely production.

Not every poem clicks, of course. Another poem published in Slate,"Two Million Feet of Vinyl", worries an idea instead of bringing it to life. A bit laborious, heavy on the obfuscated detailing of a industrial manufacturing in the attempt to let convoluted descriptions yield a strange, alienated poetry. But one sees rapidly where this going, where everything, including workers, are mere materials to be converted in endless, brutal processes, and wind up as dust. Powerful, perhaps, in a poem that doesn't telegraph it's tragic punchline so much--you can see it coming like the Underdog float in the Macy's Holiday Parade--but here it just hangs there. You want more and it doesn't come.It appears that he's seen "Things to Come" recently, and is enamored of "Modern Times" and tried to emulate their effects with his own reassembly of the deadening effects of a technologized economy. But this is not a journey where Luddites and technocrats haven't gone before, it's a set up for a joke; man shapes his tools, after which the tools shape man. It's a poem based on first-semester political science lectures. The level of discourse is fine for freshmen, but by the time one gets around to be a published poet there is the reasonable expectation that there's more than the gasping gee-whiz of it all occupying the writer's worried mind. What's being delivered is the moldy metaphor of alienation in Modern Times, that repetitive and mechanical means of production have made a man a part of the machines he invented to save him labor and time.  The facile equations between machine processes and the rescinded world are irksome at best. I don't know if he intended this to be ironic, a parody of futurist rhetoric, or whether he merely wanted the glorification of a brute, soulless contraption would itself yield remarkable poems of the "found" variety. This isn't the kind of ambiguity that makes for great art, because it would have to at least point toward something, give a sense of direction if it were worth discussing longer than a terse dismissal. But this points nowhere other than at it's clipped locutions. Powell is a good poet who must have dashed this off in an odd mood and didn't see fit to change it. Fine, I have dozens of poems that exactly like this; cryptic, spacey, unyielding in their impenetrable weirdness.
at May 25, 2008