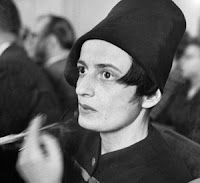 Now, more than ever, I believe The Fountainhead, to be a dangerous book. This may worry a point already mulled over here, but one cannot just pass-off this book's implicit assertion that mass destruction is justified in the name of "higher values" whose substance supposedly overrides the need to respect and protect human life. It is only irrational romanticism and literary convenience that Rand softens Roark's destruction with an empty structure. Roark is the hero of all those ruggedly individualist libertarians whose opinions sound as oddly uniform as CPUSA position paper, but shed of the that odious veil, he's pretty much the prototype of the perplexed goons and gangsters whose lives are committed to making the world notice them by the most miserable means available.

Rand a sense of humor, a meat hook kind of satire that wasn't especially funny to a readership unaware of her set of villains; a salon scene in Fountainhead, where progressives and other manner of elite collectivizers hold forth amid an exchange of vaporizing platitudes, comes as a surprise, considering the other wise lock-box seriousness of the rest of the novel. It's ironic that I imagine this scene makes me think of Rand and her circle sitting around themselves at some interminable skull session, reaffirming a core set of involutedly starchy tropes that reduce what they think is a comprehensive critique into short and simple phonemes.

Anyone wondering what practical use a Rand-obsessed architect might be outside a ridiculous plot line would pose the question. Rand's brutal prose makes her hero's activities to be the most direct means to Resounding Truth , but she is an extreme romantic who , no doubt, thinks that her fiction were reasonable outlines of how the world actually works. No doubt she sees the actions in her novels as being the diagnosis of what ails her adopted society, which places her in a tradition of the Naturalists, who in turn wrote longish, turgid works. Even so, one is within one's rights to query what real good Rand's heros might be if you needed them to commit an actual task, apartment demolition excluded.

The idea of social construction has more to do with the structures humans create within a phenomenal world, and it additionally supplies an idea of how the human structures of culture, society, law, institutions are able to adapt to a world that functions quite independently of the absolutism Rand would insists she's able to distinguish. Rand insists that there is a world with a fixed , finite , and intimately knowable existence upon which her Ideal Geniuses can impose their own Systems of use. This is the kind of End-of-History daydreaming that often sullies insight, whether Marx, Toffler, or Rand, and with Rand's ideas, giving the phenomenal world over to the unencumbered exploitation by the kind of genius that is hers alone to define, we come to the end of discourse and arrive at a dreamy heaven.

Social construction, in the writings of Erving Goffman and Thomas Berger, Lyman and Scott, among others, describes the ingenious ways that humans create cultures and societies and form kinds of political resources that aid populations to exist within an unmindful nature, and they describe as well the notion of action within the socially-constructed systems; it is more a theory that describes how communities are formed and remain dynamic within a material world, whose final and ultimate nature is unknown, unknowable, and finally irrelevant.

If we can't know anything about the ultimate nature of reality, how can we make claims about it, such as whether "it" has any "relevance" to the familiar world of medium-sized objects?

We can make our best general statements about what comprises what we know of reality drawn from the best measurements we can take of it, but a claim to a final, , conclusive and "ultimate" definition of that reality , is arrogance, and over rates science's ability to replace the comforting theology of religion and other exotica to contain our references within comprehensible and metaphorical boundaries. Such boundaries prescribe limits to what nature is, and operate on the notion that it is containable and finally exploitable to our own end, as the thinking has been for centuries that reality exists only to furnish us with raw materials to pursue or own needs and abstracted desires, free of consequence.

This is hardly been the case, as the results of industrialization and war have come back to choke us in the air we breath. We can , though, make statements about what we measure, and piece together some sense of reality that becomes a comprehensible world where laws, culture, religion, art and economics are devised to aid in the creation of human communities. Within that grossly over stated riff, there is infinite variation in how resourceful the human race is in constructing relevant communities of politics, culture and commerce. Only that which man makes can man know. Vico wrote that.
at May 26, 2008