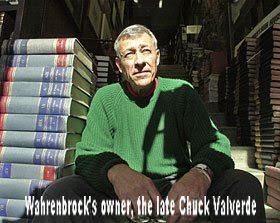 Wahrenbrock's Book House, a literary resource in San Diego for decades, has suddenly closed it's doors forever. Information about the reason for the abrupt closure is scant, and the loss of this store leaves a significant gap in San Diego's reading and cultural life. Bookseller Dennis Wills, owner of D.G.Wills Books , was a good friend of the esteemed late owner Chuck Valverde and wrote this letter to all who've loved and found solace in Wahrenbrock's crowded stacks, finding the odd, the unusual, the rare, the crucial book they had in mind when they entered the store. Dennis expresses as well as anyone can the gravity of the loss:

To whom it may concern:

I have just learned that Wahrenbrock's Book House will close. While I remain unaware of any pertinent details which may have led to such a decision, I heartily implore any powers that be to reconsider the grave and momentous implications of such a decision. Sylvia Beach, publisher of James Joyce's Ulysses and owner of the renowned Shakespeare and Company in Paris, the most famous bookstore in the world at the time, was compelled to close down the store in the 1940s only because occupying German soldiers threatened to confiscate their inventory.

While Vernon Wahrenbrock may have founded Wahrenbrock's Book House in San Diego in 1935, for two generations booksellers and book buyers from around the world have come to know this flagship bookshop repository in this part of the United States as entirely a reflection of the work and the personality of Chuck Valverde and his very able colleague Jan Tonnesen. While Chuck is no longer with us in person, his legacy continues onward as reflected by the vast holdings of inventory available to the many thousands of gentle book lovers who seek out Wahrenbrock's from throughout the world, but also from the thousands of arcane and unusual items listed on the internet. To deny the book public throughout the world access to these vast holdings would be a terrible tragedy.

I sincerely hope and implore that some transitional equation may be created that will allow the legacy of Chuck Valverde to continue. The loss not only to the world but especially to the countless thousands of San Diegans who frequent Wahrenbrock's constantly is inestimable and unimaginable.