The crows resent the parrots 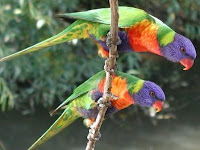 I was walking back from the market a couple of days ago when I beheld the loud screeching wing spans of Amazon parrots flying toward a power line, where they alit
with several other parrots on a power line that ran in front of a church and some densely packed apartment buildings. Beautiful as they are, these birds are noisy, noisier than the crows that have become prominent in the San Diego area in the last five years. I could well imagine worshippers and the preacher competing with the cacophony during a service, the parrot bawks , grunts and screams a wild counterpoint to exclaimed interpretations of Bible quotes defining the definition and progress of God's creation. The parrots might seem like the rude boys in the back of the hall, punctuating the solemnity with juicy arm farts. From what I've heard from others, the parrots are especially noisy early in the morning, when they make their collective noise and then take flight at the same time; one's plans for sleeping in spoiled by species behavior. Not fun. This inspired this attempt at a poem about the parrots and the crows that might resent interlopers. A first draft, any comments, criticisms, suggestions are appreciated.


The crows resent the parrots

The crows on the wire
move over and then
take flight on burnt, black wings
as louder screeches, longer wing spans
crowd the sky and obscure clouds,
green , screaming creatures
from the lurid loop
of the Amazon
wintering in manicured palm trees
or monitoring intersections
from sagging telephone wire,
the tree in front of your room
is alive with early morning parties
taking flight , branches snapping
and feathers shed, falling to
graveled yards in dervishing twirls,
Roofs of apartment buildings
have new sentries I see coming back
from the store with bags of food
and cleaning goods,
glass rattling protests,
a flocked fluttering of wing,
each red capped head tilted and peering
with one good eye and then the other
while my shadow stops at the corner,
waiting for the light,

Squadrons of crows
fly from tree to chimney
and back again
before they align
on a balcony
in a line where they
seem to leer at the parrots,
as if intent on staring them from their roosts,
casting a slick and darkened vibe
through the air
that Winter is gone
and it's time to go home,
south, if not further.

There are no travel plans
or calendar days
in a parrot's life, it seems.
In the middle of May,
approaching June
and the death traps of July,
cats and nervous walkers
flinch and scatter
walking past big, unshorn trees
that used to disguise the blight
of the last century's architecture.

Now even the plant life is too loud
for human habitation.