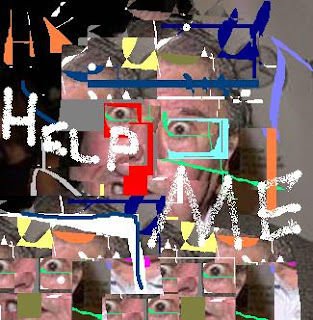 Rollo May asserts somewhere that pure, sheer, absolute innocence is inviolable, and that until the one that's blessed to be in it's wrap willfully samples knowledge of a grittier world, they will be protected from harm and the ill activities of others. This sounds idealistic, even optimistic to me, and is an aspect of a larger argument -- exactly when did we fall from grace? -- That drips with nostalgia for a more interesting era, before we invented the club and the gun.

The difference between being honest and being naive, maybe. Honesty seems a state of complete awareness about the world, a state where one can peer into the eyes of others and discern real motivations behind the eyes, and in turn trust an instinct that steers them from misadventure and victimization. Honesty is a quality that is earned, a purposeful armor. Being naive, then, would be a choice for being stupid, a refusal to realize materialistic agendas of others who view others not as citizens but as resources to be harvested, stripped, denuded. Is cynicism is but naivety in another guise?

Too encompassing, I think, though it is an easy matter for someone to feign worldliness with sham cynicism: abrupt dismissals of topics with impatience and pat-rants are a handy method of avoiding conversation about things. Call someone naive is a statement about their lack of real-world experience, however it gets defined. It means, though, that some conceptions about the way life works hasn't been tested against actual events and that a learning curve has yet to commence about our subject. The cynic believes the world goes only in one direction, is motivated by the worst instincts, but more times , if we have our archetypes clear, it's a world view that's formed after a run of misfortune. At this point one may call the cynic short sighted, as in not taking other things in consideration, but not naïve. ‘‘Ignorant is a better word, as it becomes a willful act after one has tasted the imprecision of real events. It's a refusal to know more, as opposed to a state of not knowing at all.

Fiction does not need theory in order to be written. First the fiction is written, the artistic moments, and then theory arises as a consequence of critical reading. Theory is a coherent statement of known and verified material facts, in this case works of fiction, and the formation of theory, if it's to be interesting , comes after the appearance of a the primary source. Postmodern critics and erstwhile deconstructionists seek to have theory on the same level as fiction, literature, but in terms of actual practice, theory is a secondary activity, a delayed reaction to fiction, not a simultaneous occurrence. Changing tastes and fashions have more to do with novels falling off the radar, not an absence of theory. And a philosophy without a theory to begin with is not a philosophy at all, only the same said fashionable chatter. For real philosophies that get dropped into our dirty bin, it's most likely that their systems and suppositions have been supplanted, discredited and sufficiently critiqued into submission, which is just the happenstance of intellectual shelf life.

_____________________
All bad writing comes from writers who are writing badly, even normally good writers who've undertaken bad projects. There are many tangible reasons for bad writing, not the least of which is the plain truth that the world is full of bad writers who manage to get their scams published. Poe wanted desperately to be thought of as an intellectual, and tried to limn the metaphysical structure of the cosmos in such horse-shit Meta essays/stories like "Eureka" and “The Philosophy of Furniture". These are turgid meanderings in an involuted prose style that would have been consigned to the dust bin had not Poe more than once hunkered down and committed himself to unblemished storytelling, the work that is the basis of his deserved reputation as an original. I think his reputation would have been made even without his dabbling in theory. He was bad at it.

Individual talent is the issue, not generic determinism. Alan Lightman does quite a good job with his novel The Diagnosis, and the charge of it being "over rated" is a remark worth noting when one has read the book and is ready to give a critique on matters relevant to its execution and substance. Modernism cannot get "less modern", I think, because the modernism seems, in itself, only a tidying up of Romantic impulses before it, as post modernism seems only a refinement, an updating of some essentially modernist tropes and stylistics. Each age takes the conventional set of dreads and sagas and makes their contours conform to the constructed world of the current moment. What counts is the individual talent that becomes the substance worth talking about. Even in a post-modernist arena, subject to slippery laws of equivocation and deferral, the talents that transcend the limits that constrict the names assigned art-making processes and histories are what matter for us.


David Foster Wallace, a civil and occasionally enthralling wunderkind whose is the leading light in the latest generation of post modernists: certainly, the man can write, though his ability to discern between gleaning the telling detail from a life of observation and mere accumulation weighs his prose into a sagging, soggy bag of entrails, dripping a tasteless juice. Infinite Jest is not the masterpiece his admirers want it to be, but it has moments, pleasures, though it drags around the references as if the author were selling the Britannica door to door. His brief works are much, much better, his best form. Underworld is well worth finishing, Scott, though it does get a little clogged in the middle section --middle - aged spread, I suppose -- but the work does sustain itself in total. There is simply too much brilliant writing in the coming pages to pass up, and one does achieve a sense of the largeness DeLillo imagined with his interlinked stories arranged haphazardly in the second half of the American Century. The bomb, the baseball, the mad artist in the desert painting the old , rusted bombers, the nun scouring for humanity in the South Bronx, the use of the language of professional waste disposal, all become part of a metaphor that makes sense in an associative sense that left me particularly breathless by the last page. I think it's a great post-modern novel, but beyond that, it is a great novel, period. One wishes for the careful trimming and tucking a good editor might have had in making Underworld an even stronger masterpiece, but please, do read ahead.
at March 10, 2008