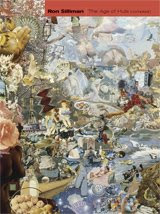 Ron Silliman, an envelope-pushing writer whose unmoored referents are written with a rigorous methodology and purpose, uses images and image-born phrases in long successions that are seemingly separate from the sentence before it and the following sentence. In this poet's case, though, his method isn't isolating sentences as autonomous language units in a gallery-lit vacuum but rather bringing the rest of what's said in a place to bear. One has the dizzying sensation of hovering overhead a crowded train station at Holiday time; chaotic though it seems, one does understand that conversations continue, jarring contexts are rattling sides by the side like boxcars, images, and remarks on physical things--a sign, a face, the light of day--is dropped and reappear, changed by the response and changed as well by conversations around it competing for the human ear. Silliman's new collection, Age of Huts, brings together several books he's published as a long-standing project. It makes for alternately exhilarating and exasperating reading. Those who stay with Silliman and his task are rewarded with the most thorough ongoing examination of the American vernacular since William Carlos Williams composed and assembled his central epic poem Paterson in 1963. Silliman's is the language of a place, and there is a logic as the streams and eddies of unassigned sentences the blended variations at once rich, dissonant.


The pieces are independent of their human personalities and the disparate subjects, an olio of the philosophical and inane, autobiographical and picaresque, the snapshot summary and the extended and unmoored disquisition, are materials that are not so much "mashed together" (as the current and lazy parlance has it) but rather layered, tangled together, interacting in phonemes and bits of invested rhetoric that suggest a great, breathing beast, a language that collides, contradicts, clarifies and is, in effect, constantly making absolute statements about character and the nature of place, only to have the declarations modified, adjusted, changed into new discourses. Each line can well be said to be the start of another poem, and although the approach, which foregrounds language as subject matter, and while the aesthetic effect of Silliman's poetry is a collection of the unchained references --there is a cubist perspective that arises when one gets a hint that each of the writer's pieces, non sequitur that they may seem, have physical locations, sites, real people with whom he's had real conversations, and there is stammering and stuttering rhythm which is oddly musical as he works through his variations of chosen icons--tone appreciates the length to which Silliman has continued his course of examining the dictions and tropes that constitute the way we address experience and position ourselves in the world.

That is the difference between Ron Silliman and others. Anyone who thrilled to the shredded surrealism of Bob Dylan's liner notes for Bring It All Back Home or Highway 61 Revisited (or found themselves laughing out loud or being stunned with the cranked-up mix of roadhouse wit and word-salad in his lone book Tarantula) will find a kindred spirit in Age of Hut (Compleat); Silliman loves language enough to take it apart to see where in the language the stress of personality comes in, the irreducible trace of individual intent that survives a language fragment being wrested from a larger context. The sound of the words as they're spoken and linger in memory seems to be Silliman's central fascination, and to say the least, Age of Huts provides the shock and surprise of hearing ourselves speak in our plenitude, variously manic, reserved, joyous, cranky, curious all in the same clusters of utterance.
at March 07, 2008