THE ROOM: no one home 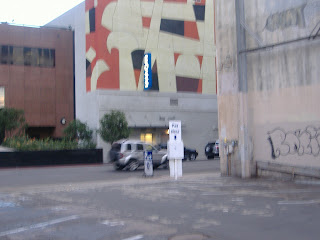 There's a poster on The Fray's Poems forum who identifies himself as "angry young man" who responded to what he thought was the poetry editor's sub-par selections in Slate with a post titled provoctively "Bring me the head of Robert Pinsky". This brought a smile to my face, less for the sentiment than the paraphrase of a little known Sam Peckinpah western Bring Me the Head of Alfredo Garcia.

I would just assume allow Robert Pinsky to keep his head, since I have no need for it, nor have the room in my freezer to store the severed dome. I can't help but think of the cartoon show Futurama where 20th Century celebrities and politicians are kept alive as talking heads only, perfectly sane and full of their trade marked quirks despite the fact that they live in life-sustaining jars. Might we imagine if Pinsky had been one of those preserved , bodiless heads continuing his own celebrity shtick as he promotes poetry to the remaining half dozen readers in the 26th century?

Depressing to think about, I guess, even after a guilty laugh after the grissly fantasy. Better to allow the former US Poet Laureate to literally to keep his head and wonder instead why he loses it figuratively over poems that couldn't raise a belch from the most sodden of open reading attendees. Hmmm, still too grissly. Maybe a cliche is more fitting: "why does Pinsky flip his lid over poems that are duller than a pig farmer's shoe shine." Better? Good. My apologies to pig farmers, though; you are not the ones who lay these tinker toy poems at our collective doorstep.

It's interesting, I think, that Pinsky has selected poems two weeks in a row that are, by comparison, clear and easy to parse in their language, swinging from the extremes of presenting us with work that was notably for their impenetrability and compressed incoherence, swinging from the spirit of TS Eliot on the one hand to the daisy-chaining clarity that resides on the other. What I'll say is that he has an inconsistent ear when he selects from either side of the big river that divides the approaches. The Room by Michael Chitwood seems to be after the spirit of the brilliant poet Charles Wright, with a plain diction that wants to consider the nearly ineffable in this existence in a cherry-picked locution that might manage to vividly suggest the sorts of chills and rushes contemplation and recollection can give a fellow. It starts off well enough:

One way or another, we must all leave
I said to a room, a room empty of people,
save for me. There were two doors to the room,

ample avenues of departure. A small town.
A family. A faith. A marriage. A career.
The dailiness of days' work done for years.

Even though the last line of the second stanza, The dailiness of days' work done for years. is one of the most awkward alliterations I've read, one does expect the build up, to move with clear purpose to the physical details that flesh out the abstracted , cut-up quality that begins the poem. The staccato , slide show like visualization should merge and blend with the narrator's re-imagining of a scene, a series of scenes perhaps, that have formerly been sketchy, elusive, and only now, just now, come together as sensations connected finally to biographical details.

But it doesn't, and it's a shame, because what he get again is a poet who prefers the linguistic shell game in order to defer clarity rather than feel deeply and embrace the likelihood that what is now felt so keenly can not be undone,neither remembered completely nor resolved. Chitwood gets caught in a series of puns, dualisms, parallel associations suggesting preferred narratives, all of which could be intriguing if linked to the telling detail that evokes the larger view, the coincidences, the bad timing, the missed chances that seem to be the motivation of this poem, but which are absent and so useless to making this poem breathe something greater than the brief signs and whimpers that make up these lines.

We are leaving even as we speak I said to no one
in the room with me. To whom did I speak?
To ones already left, though left can mean

both to remain and to depart? Dearly departed
you remain here with me in this empty room,
room enough for you, empty in my aching thought.

Leavings are that scatter, those remaining remnants,
our language littered with what can't be gotten rid of,
our thoughts, our bodies ghosted, the leavings remaining.

Who the narrator is talking to is the reader, not the person or persons gone from the room he finds himself within, and this is the problem, I think, since I haven't been able to shake the feeling that Chitwood is rehearsing what he considers his best lines, lining them up with just enough of an arc to make these stanzas thematically consistent and leaves it all there, not so much impenetrable as it is unfinished. This is the kind of writing lesser, Language School inspired , usually undergraduate poets do, teasing a readership with the lure of autobiography and serving them a half-baked piece of post-structualist ambiguity instead. One may, if they wish, dwell on the purpose for the lack of details beyond the tactiturn murmerings Chitwood, but that, I think, would be an activity that would be more interesting and illuminating than the poem one was trying to explicate.
at February 27, 2008