Things die, and no one knows why 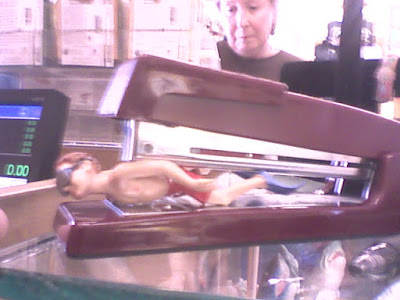 It's September 11th, around 6:30 in the morning, and MSNBC is rebroadcasting it's real time coverage of the terrorist attack on New York's World Trade Center that killed 3000 people nine years ago. It's dramatic footage, the emotions start up again, the rationalizations commence anew about what the world has come to, the chatter of news reporters, camera men, politicians, witnesses  fill the room. Nine years ago the air was composed of equal amounts of horror and incomprehension, so much death and destruction for reasons as yet unknown. No one knows why this happened.  A fatal guesswork became our national past time.

It's suitable , I suppose, that what Robert Pinsky has chosen to share with the poetry readers of Slate Magazine this week deals with the passing of people, places and things from our lives, suddenly, abruptly, without explanation. The poem has it's charms, although it dwells too much on how it sounds rather than what it conveys: it's a trifle too well made to be wholly convincing for a topic we are warned has no satisfying resolution.

Bats Perish, and No One Knows Why
Reeves Keyworth


Secluded in their cold arcades of rock,
embraced by a thousand reverberating kin,
bats have perished and are perishing.
The plowboy in the field, dreaming of love,
perishes, and the scorched grub,
disclosed in the moist earth.
Spiders and the spiders' children perish:
the hawk, the stylish dragonfly, the trout.
A beetle cocks its blurred eye
at the underside of a leaf and perishes.
The lizard perishes, and the famished fox.
The mule's body subsides and sours on a riverbank.
The worshipers perish and the mourners:
the strenuous celebrants, the terrier with his grin,
the best-loved child, the browsing herd of pigs.
The tongue perishes, and the eye.
Lamentation and praise, incantation, song,
the resolve of the wolf, and the wolf's prey—perish.
The grassland perishes in fire;
the ant drowns in a waterspout.
The bear, the bat, the water rat,
the woman leaning on her windowsill,
the protozoa sunning in their sluggish green:
perished and perishing. No one knows why.


People and things are essentially viewed here as leaving this life doing what it is they do on a daily basis; these are rituals, poems, prayers, beseechments and be-ratings that bring the collective voices to the highest pitch of vocabulary , these are raptures and negotiations and plans laid out and explained that clarify the meaning of specific actions , and yet there is intervention over all. For all the songs, odes, rants, rages and contract law , for all the daydreaming and scheming, for all the knowledge of the world and survival skills man and animal alike have respectively accrued, there is intervention, interruption, that point in existence when existence ends and whatever strategies that have been devised with the language of social and legal interaction no longer apply.

One's declarations , combined with the last set of gestures and positions one happened to be in, are instantaneously ironic as soon as one keels over, drops dead, grasps the chest, croons the rhythm of the death rattle; but why is it ironic? That's always the curious element of  things in this world, constructions of language that are intended to be blue prints for what it is we're supposed to build  in the community of men are turned into fancies and fantasies as soon as one reaches their expiration date. It is a moment of  terror, that microsecond when you realize that you've been negotiating and and auditioning for entrance to Heaven after the lights go out; death is a dark room we all enter . No one comes out the other way to tell us how good the party is, if there's an open bar, if your aunts and uncles are there with a list of things you never did for them. Terrifying stuff.
Keyworth's poem crystallizes the situation as we uses a rich language that skillfully describes the generalized world of everyday people  and creatures in the field dropping dead amid their daily rounds, but a language that cannot penetrate the last barrier between the world of appearances and reveal those things only God has an inkling of. And so it is with the commentators, Couric, Brokaw, the whole lot, talking to witnesses, experts on terrorism, first responders:  whatever the rhetoric happens to be, all they can really talk about is what they saw , how they reacted. Our life , Keyworth implies, is an attempt to create narrative that accommodates each instance, every contingent. That narrative is always destroyed.

And no one knows why