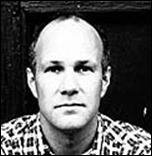 The latest Robert Pinsky offering on Slate is Henri Cole's "Eating A Peach", which made me feel as if I was undergoing a gruesome regime of aversion therapy.I read some Henri Cole a few years ago and remember that his work left a bad taste in my mouth. There's nothing I remembered specifically that put me off Cole's work, only that minor, creeping dread that goes up your spine in a chilling rush as you come across a dreadful totem. Now it comes back to me, and here we have a compression of bad habits and awful writing that lends you the momentary urge to fall back into deep, restorative sleep, or swear off sleep altogether.The problem here is tone , which is arch, Gothic, over generalizing in reach and utterly unconvincing in how the epiphanies and moral connections are unleashed. Cole writes as if he were a racing dog who has no mind or use for the residential build up to a point and instead chases after profundity mechanical rabbit from the get go.

These are lines revealing a protagonist with Geiger Counter sensitivities who cannot so much as snack on fruit without the Ghosts of Significance wailing and carrying on and making so much racket in his head that he simple joys like fruit deserts cannot be enjoyed in themselves alone. Instead Cole's eater is beset with all sorts of confusions and conflations, feeling like a murderer but also probably not a little like a vampire and rapist as he violates "moist pulpy flesh", and considers the pit at the center of the orange as would a taxidermist, suddenly locked on a site erases the squalling mess of "erotic love" and all trace of the outer world's intricacies. There is the possibility, I suppose, that Cole intended this as a send up targeted at vegetarians and vegans with the archly phrased message that even eating fruit can involve you obsessively in the entrails of a once living thing one his consuming, but the humor, the punchline eludes me. (Which wouldn't be the first time obvious matters have eluded me). It depresses me to consider that Cole is dead serious with this poem, sober as a Mormon barn dance:

Eating the peach, I feel the long wandering, my human hand—once fin and paw reaching through and across the allegory of Eden,mud, boredom and disease, to bees, solitude and a thousand hairs of grass blowing by chill waters.

This eager wallow in vague supposition and preening dilettantes reminds me of the absurdly pretentious lyrics that decorated the album sleeves of Yes and Jethro Tull , or worse, Vandergraff Generator. Cole has managed something both unique and odious; for decades rock lyrics have been ruined as songwriters tried to sound like poets mulling over, contemplating and examining the heaviosity of existence, and now Cole returns the favor by writing bad poetry trying to sound like bad rock lyrics. Another post-modern moment, but one where there is no irony to what strands of high and low culture are being brought together and being given a gaudy coat of bright, speckled paint. Irony at least makes a point about the interpretative baggage one carries with them and demonstrates, through incident, the crucial information that intellection and systematic thinking donÂ’t alter the course of things.Cole's invention is absent any form, exists in  arenas that are liberated from a concern as to how one wants to sound when serious matters are discussed. Each trick and gizmo is used to make the unspectacular seem resolutely violent, dramatic, decisive. The endless renderings of metaphor riven reality wearies the imagination, exhausts all patience. It is too much foreplay. No one should have a life so persistently dramatic, nor should another have to read such over ripe accounting of clouded perception.Cole gives us the physical details and tactile elements that I would normally insist are crucial for a poet if he or she is to wander off into the language of near-philosophy and the attending subsets, but there is more to it, which is an ear, a sense of shape, a sense of proportion. This piece is an over stuffed suitcase, and our poet couldn't decide what to leave out, reasoning, perhaps that each little clause between commas, each writerly riff or pun on death and the food chain might come in handy should a smart remark be needed in his daily wallow in ersatz angst and tubercular tedium. He could have whittled this down to a sharp, pointed perception, a chiseled image and a powerful, understated idea, or he could have gone at greater length, perhaps fashioning a language and rhythm that would accommodate his Gothic metaphysics and save them from their current pomp. As is, he hasn't a poem but rather a humorless, droning groan of self-importance.
Â
at April 18, 2006