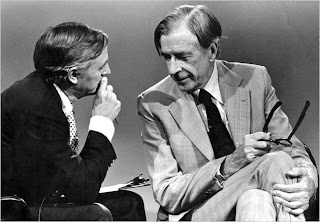 I am loathed to say anything nice about conservative commentators, at least the mangy generation that arose with the death of the Fairness Doctrine and who have, in turn, been anything but fair in their remarks regarding Democrats or anyone else who isn't in lockstep with RNC or Religious Right talking points. This odious crew, spearheaded by the absurd existence of Rush Limbaugh and followed, in various degrees of venomous deceit, hate mongering and the subjugation of honesty, ethics, and principles in favor of fat book contracts, political wonkery on cable television, and the well-rewarded obligation to be apologists for an unjustified war that has put America in increased peril and made our lot in the world community that much more difficult, is a sleazy bunch of propagandists. We speak of Ann Coulter, Michelle Malkin, Sean Hannity, the clustered fools at the Weekly Standard. Not their concern are the virtues of debate, tolerance, or truth. Political discussion in this country has gotten coarser, dumber, louder, meaner in the last twenty years, and the scales have been tipped toward what we call wingnuts in terms of who was allowed to have the loudest megaphone. The networks were bullied and badgered to have more conservative pundits on their programs than those who would be off the extreme message or even the least bit left of center. As Eric Alterman asked in the title of his fine book, we ask again, "What Liberal Media"?All that said, I am saddened that conservative gadfly and National Review founder William F.Buckley has passed away at the age of 82. I've always been a liberal Democrat and have found myself on the other side of issues with the late Buckley, but I watched his show Firing Line each week and admired the man for his intellect, his wit, and his dedication to keeping his program a civil forum where actual differences in political philosophy and contrasting views on public policy could be discussed. The difference between William F.Buckley and the current spoiled crop of right-wing hacks is that Mr.Buckley was a true intellectual who listened to his guests and posed hard questions to them respectively, artfully. It was part of Mr.Buckley's style that he would skewer his opponents with their own words, or catch them in contradictions they couldn't readily respond to, but the method with which he stood his ground and defended his conservative faith was masterful, brilliant, admirably civil. It's worth noting that Buckley maintained good relations with many liberals and progressives, including long-standing friendships with John Kenneth Galbraith and Arthur Schlesinger Jr . He had a shrewd wit, and I always enjoyed the story that when a new collection of his essays was published, he mailed off a host of free, autographed copies to a good number of his literary friends. As Buckley told it, he didn't sign Norman Mailer's copy on the title page, as is custom, but rather in the book's index. There, written in the margins next to Mailer's name, Buckley had written "Hello Norman! Regards, William F. Buckley."
at February 27, 2008