Clapton: Used Up Before He Was Half Way Through 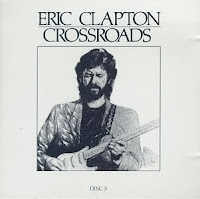 I'll never say that guitarist Eric Clapton can't play the blues; it's because of this particular brilliance he has in his wrists, where he gets that ghostly vibrato and stinging , bittersweet bend just right, that keeps me listening to him since seeing him with Cream at one of those ballroom dances in the late sixties. The man can play; he has, though, made the sad decision of pop stardom over integrety, not a thing he can be blamed for, since who among us can easily declare they'd do otherwise if such fortune were ours? The fact remains, though, that one wishes Clapton made better choices. This an old review I wrote in 1990 of a Clapton box set, Crossroads, and herin we find me opining in what what seems like the reading equivilent of monotone that Slow Hand was sucking in the Nineties.
_________________________________________
I would have to say that I have relished the idea of having the works of many favorite rock musicians gathered in grandiose, multiple-disc packages, complete with exhaustive biographies, obscure photos and important dates, for no better reason than to affirm my vanity that rock and roll is art, after all, and that we’d better take notes and cram for the final. Reality settles in fast after initial enthusiasm over this notion, leaving two leveling considerations: one, how many of us want to get mundanely scholastic about music that free us from mendacity and two, how many rock artists have there been whose life’s’ work merits obsessive inspection and a fifty-dollar vocabulary? On the second point, one of those artists isn’t Eric Clapton, whom six-record (four CD) box set, Crossroads (Polydor), manages the opposite of what its’ compilers intended. A generous overview in the British guitarists’ twenty-plus year career, ranging from well known songs, classic performances and out takes from past sessions, this collection, over all, confirms my suspicion that Clapton is an artist with obvious and appealing attributes who has been over-promoted to solo-artist status, placed in a league where he’s plainly out of his depth. Consider the sequence. From his early work with The Yardbirds, with their raging avant - poppism and more significantly, with John Mayall's Blue Breakers, Cream, Blind Faith and Derek and the Dominoes, we saw the progress of a gifted instrumentalist evolving in sympathetic contexts. With Mayall, he’d taken on the mantle of Chicago blues tradition head-on and personalized it, soloing with such vengeance, confidence and depth of feeling that matters of race, nationality or accent ceased to be issues- With Cream, he fused his traditionalism with the experimental impulse of Sixties British Rock and along with Hendrix, re-invented the mode and method of rock guitaring. Through his work with Steve Winwood in Blind Faith (a regrettably under-rated band that was never given half a chance by either critics or listeners) and with late American guitarist Duane Allman in Derek and the Dominoes on the seminal Layla two-record set, Clapton was on a continual upward spiral. in each case, he situated himself among mentors and collaborators clearly his equal who could provide a means for the guitarist to continually lay out his best efforts. These efforts have stood the withering and eroding test of lime and we have here some tare examples of music that still cuts a fresh path even by today’s’ jaded, audio-glutted sensibilities, The upward momentum stops, though, by the time Crossroads racks pass these hallmarks and proceeds through the remains of Clap- tons’ later work. Seemingly embarrassed by the adulation and financial windfalls his early work gave him, the later work decidedly lost its’ aggression, affecting a laid back manner that was an anathema by his previous standards. Country blues, rhythm and blues, reggae and country western were the touch stones of the new approach, and indistinct olio under which his playing was subsumed and defanged. Save for and occasional foray into straight blues, where the essence of his brilliance shone through with no regrets—the mournfully sustained notes, the slicing. Taciturn runs, the embroidered phrasing that spoke volumes about pain. joy and growth, with scarcely a lick issued for its own dubious sake—Clapton - seemed all but anonymous through these tracks, It was as though he were flying for a zero-degree of responsibility for the work, as though the previous Clapton hadn’t existed at all and there fore, there was nothing for him to live up to.
Not that there hadn’t been hits along the way, such as “I Shot the Sheriff’, cocaine”. “After Midnight”, “Lay Down Sally”, but even these gems underscore the difficulty. His later career is best remembered more by songs rather than albums. For an artist who’s the subject of a retrospective as exhaustive as Crossroads, with its claim of documenting legend and legacy, the fact that none of my friends (rock and roll zealots all) have been unable to name just three from the scads of his post-Layla releases tells me there’s something wrung with this picture. Boxed sets by their nature imply memorable music... But if a major portion of the musicians work draws either a blank or sketchy impressions on a collective level, we might assume that we’re operating under the wrong set of assumptions. The real problem with Crossroads, is that it doesn’t add clarity to Clapton’s’ work, but tells rather where his bad choices have been over and over, but which also gives an idea of what he might do about his situation. My advice, made simple, is for Clapton to get a little more honest with himself and admit that he needs a band of equals to move beyond this particular rut. It’d be a simple admission that the unchanging core of his talent is as a side man, collaborator and band member not as a band leader. Clap ton needs to be a member of a team that plays rock and roll whose whole is greater than its individual parts.
at July 17, 2007