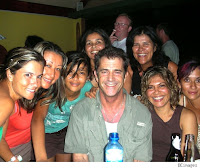 Mel Gibson Hits The Bar In Costa Rica
Tonight I celebrated twenty years of continuous sobriety, and it's instructive to see that photo of Gibson, fortified with copious amounts of goon juice, smirking like the clueless nitwit who'd drank again to silence the noise that's clamoring between his ears. Gibson is an artist and all that claptrap, but no one really buys that it is a condition we must accept and tolerate if we're to see him continue making films. The mad artist who is so sensitive to life's crushing awfulness that he or she has to drink and take drugs just to stay alive and reach the soulful part of themselves is a romantic crock fans and some critics have used to excuse the drunk, slovenly assholism of Kerouac, Bukowski and a slew of other sloshed scribes, a generational habit of mind that was enabling in two distinctive ways; it made the artist feel that they had to drink, that it was their responsibility to drink in order to stay true to their art and audience, and it give a perfect escape for the audience from confronting the blunt fact that alcoholics , when they drink, are jerks, assholes, reprobates, completely unpleasant people when they part take of hooch. Gibson, of course, is a disturbing personality and artist whose continuous stream of good reviews has more to with financial matters than with merit, and he's someone given to some problematic religious beliefs that can't help but get him into controversy. The actor/director might well be a creep sans alcohol, but it must be said that having it in his system brings that character trait to full volume. This is why it's instructive for me to see his smirking drunkenness this night of a landmark anniversary, as I have several photographs of myself with that same graceless grin, that same
look that makes one appear that they're being propped up, lest one's face wind up in the chips and guacamole. And lest I take too much credit for the felt miracle of my sobriety, I can see that face and that bottle can be mine again anytime. posted 07/17/2007 at 01:31:41
at July 16, 2007