James Reiss at the Precipice 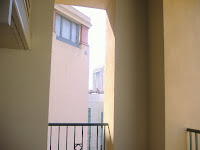 James Reiss’s poem "Bureau of Missing Persons" disguises itself as a Borgesian fable where we have the superstructure and the casual filaments of narrative structure foregrounded, and what we would expect is a clever and disguised fable where once again our methods of explaining ourselves to ourselves and presenting to others is composed of an endless stream of fictions, and meta-fictions pretending to be true.
It is a tired conceit at this point in the 21st century, where each fanciful bit about surfiction, fabulation, self-reflectivity and late modernist pastiche have inched from the experimental margins of literary art and have been absorbed into the supremely commercial mainstream; it’s a wonder anyone would want to try yet again to get something fresh from the ritual disassembling and debunking of the last gallery of useable allegory, i.e., literary style and it’s attendant metaphors.

From the terse whispers of Borges, Rod Serling(our Supreme Ironist and The Only Moralist Who Matters) to Thomas Pynchon’s satiric welding the beams of History, Literature, and Science together and positing them all as manifestations of the human need to create and sustain mythological structure and thus have a means to believe that there is a Plan our random experiences are connected to, and onward through the humorless deconstructions of postmodernist twitches and glitches, we consumers of culture have gotten the message after all. We are ciphers at the end of our imagining, we are cursed with a genetically-inscribed instinct to insist on metaphysical certainty only a means to sustain the race, we are, finally, merely dust in the wind (to coin a philosopher’s salient point), producing books, paintings, poems, movies and the like that get nothing at all except demonstrate our own vanity in thinking we could explain ourselves in front of our Maker should such an afterlife moment come to into being.

Reiss, though, keeps it simple, keeps it smart, and is subtly subversive in utilizing the metafictional gimmick. What strikes me as peculiar, and unique, is what seems like a reversal of the standard self-reflective ploy; where a rigorous and torturously unreadable novelist like Alain Robbe-Grillet would foreground his narrative elements to the extent that his novels were more about the sheer description of everything contained within a writerly frame, items and cracks poured over again and then again from different angles and habits of mind, all to the exclusion of characters, who, if they existed at all, were only cogs in a fathomless fiction machine needed solely to make the apparatus run , Reiss speaks of characters who wish to be absorbed by the machinations of narrative structure , plot devices, and symbolic meaning, those

In any sense, those being looked down upon, from the conceit of having those who reside in a skyscraper perched library that contains, from implication, the sum of human learning, are in the middle of the roil and rush of life, going about their business, anonymous to one another on the street, perhaps, but obviously coming from places where they were with purpose and now off to other places where their presence is desired, required, in any event, absolutely essential. The resident caretakers of the high rise archive, the presumed custodian of Knowledge and who all, of course, seemed drabbed and despairing given their nuanced insight, thanks to their study of said books and scrolls, that all this running about is pointless and without greater, nobler purpose, look out the windows, over the ledge, mesmerized by the commotion:

In the dead writer's last short story the characters
have no names. They speak without quotation
marks in a setting that looks less like a penthouse
than a storeroom for books and old scrolls.
Still, when they stride out to their terrace
and peer over the city, they swear this
is the ultimate high-rise, the true resolution
to a plot involving disappearances..

A superb and unforced contrast here, subtly put forth; those on high, an elite force anonymous in their own right, viewing the external events as if there vantage point, arrogantly cast as sophisticated and wise, were the only correct perspective, the only lens through which truth could be read. We are witness here to a myopic hubris, the unresolvable contradiction of those with so much alleged insight into how life works that they see nothing at all, that they’ve completely missed the point of literature, art is to enhance life, not embalm it. Reiss puts forth an anti-intellectual message that I find a shade off-putting—why can’t we just leave that for the Rush Limbaugh’s of the world—but he has written a clever, subversive little poem here that finds a new spark in an used-up idea. One may argue with him over a club soda in real time, but there is still the last lines to enjoy, and savor. Hamlet spoke to Horatio that "There are more things in heaven and earth, Horatio, Than are dreamt of in your philosophy" , and Reiss’s floating narrator, noting the purposeful bustle if the citizens of the street and the contrasting gloom who are convinced that humanity is governed by deterministic laws, illustrates the how the archivist’s goal of making experience fit into finite defintions will only become more unmanageable thusly:


Each evening
the atmosphere deepens. The short story loses its way.

Every night life will continue to unfold in inexplicable complex and unpredictable ways, and the theoretical narratives some of us attempt to tie it down with will just collapse from it’s own bloat.
at July 18, 2007