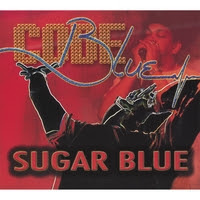 I've been playing blues harmonica for almost forty years, and the long and short of the that statement is that I'm not easily impressed with blues harpists who come along late in the day. Sugar Blue, though, is someone I take my hat off to; best known to the general rock and roll audience as the harmonica player on the Rolling Stones' Some Girls album (that's his sweet, Paul Butterfield-like solo on the signature "Miss You" track), I've seen him a couple of times when he and his band happened through Southern California on tour, and after both concerts I didn't touch my harps for a week, after which I picked them up again and commenced to practice more than I had in years. The man is restores the legitimacy of technique and speed to the blues harmonica, traits that had been sullied by John Popper, a muddy, imprecise musician whose harmonica improvisations resemble so much audio mud.Sour-note central. Sugar is fast and crystal clear and very clean in his attack; he's been criticized, in fact, for being "too clean". As it goes, there isn't a blues harp player alive who has better execution than Sugar Blue. The added plus with Sugar's playing, rare among those players who play fast and long that his solos make melodic sense. Jason Ricci and Howard Levy are others who combine superlative technique with innovation. The man can build a solo. It's not that I'm into speed and technique for their own sake, but I do admire Sugar Blue's ability to have these aspects serve real musical ideas. The new album Code Blue, is a whirlwind of the blues harp applied to a broad array of approaches, including traditional blues motifs, Rolling Stones' style guitar rock, Mahavishnu/Dixie Dregs fusion. His solos are sleek, cutting, rapid in the musical ideas coming from the band leader. Bear in mind that a little of Blue's singing goes a long way--he is like that guy in the chorus who steps

out for a solo, singing at the top of his range, slipping off key too often. That, combined with some lyrics that tend to be preachy and the lead-footedly philosophical, can make the vocalizing a bit agonizing. It does give one an embarrassing flashback, as the more Sugar stretches his vocal chords in what he assumes is maestro's knack for rhythm and blues melisma reminds me of those times , in the seventies in bands that were rally drinking associations when I was in front of the microphone, screaming and grunting and bellowing in the mistaken and drunken illusion that I sounded like a hybrid of Jack Bruce, Otis Redding and Gene Pitney. Sure enough, when tapes were played back from the frat parties and keggers we played in around the dock pilings of San Diego's beach areas, I was shamefaced and humbled. At best I sounded as if I had a sock crammed down my gullet, my mouth sealed with duct tape, trying to scream because a crazed Lobo fan threatened me with a reconditioned Trojan while I struggled against an ugly metal chair I was tied to. It was not pretty, not hardly. The best of it all was that no one was killed during my performances, and that I had fun. Or so I was told but witnesses who were not as deep in the back as I had been.Still, for Sugar Blue's part, the harmonica work is about the best one can come across, and the band is simply crack jack, nimble, sharp as a drawer full of razors.
at May 26, 2007