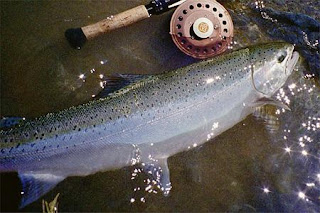 "Steelhead", a poem by Dave Lucas, is a not-bad addition to the mass of fishing literature
that we've read over the decades, a splendidly compact version of Old Man and the Sea or the fishing stories of Jim Harrison (to name but a few). A lone man in the morning fishing the cold lake waters engaged in an activity that's both meditative and primal, and then snap! the line goes taut and there is a magnificent animal at the end of the strand, reeling against the deep gash of the hook, battling to survive with instincts that are beyond the fisherman's ability to adequately turn into a phrase. But phrase it he does, and what we have after the struggle, the splashing, and the final landing of the fish is the inevitable regret not he part of the fisherman, who speculates rather mystically about the cycles of life and death and what it was in him that brought him, against all cultivation and sophistication, to participate in
hunter/gatherer behaviors one would have thought had been refined out of him.

If we could see the eyes
or the blunt spade
of its head, we might claim
to see courage in them,
or spirit.
It is this turn where poet Lucas drives off the cliff with a rather labored Laurentian valorization of the Steelhead's spirit and spirit. Lacking tea leaves or a human palm to inspect, he sounds as if he's peering deep into the soon to gutted gills for The Lesson that The Poet is supposed to have. It comes off as some as someone looking for their misplaced cell phone as it rings and keeps on ringing
somewhere nearby. Lucas does not leave it there, though, and continues to sift through the thrashing animal for footnotes and emendations to his discovery of the fish's courage


But what propels its
ten slick pounds
through the water is beyond
what we know of ourselves,
beyond

the education of the angler,
who lets out the line, then
pulls back, the give and take
of two odd lovers, until
the moment

when he jerks back,
when the water gives up
its silver cache.
And then the hollow drum
of fish

on boat. Now we can see
the black eyes, the snub-
nose and gunmetal scale,
the prehistoric fins
that keep on

treading phantom water.
The gills gape. It flips
itself over once, and stares
back with what must be called
defiance.It would have been fine if Lucas had pondered the sadness, if sadness is the word, in terms less lofty, but he ruins, utterly ruins his effect by the ham-handed and equivocating insertion of "...and stares back with what must be called defiance."
Well, no. We shall call it a dead fish and admit that fish eyes are expressionless, in fact, they exhibit no nuance of emotion, and that the term "fish eye" is synonymous with a stare that is seemingly without life, emotion, or empathy.

I can see why this would strike readers as a powerful poem, but it reads to me more an exercise on a subject that's hardly unrepresented in literature. Lucas is a good writer and I rather liked the leanness of his descriptions, but what I couldn't escape was the expectation that there would come, toward the end, something Lucas learned from
hooking this particular fish. It's obvious, and it seems false in execution. One would imagine people this given to revealed truths from common events would be too sensitive to fish in the first place.

This might have worked better had Lucas given us a proper parallel set of events. Imagine this poem's narrative commencing without the attempted anthropomorphizing, just told straight faced, and then we have the fisherman involved in his own struggle that he would struggle with, seemingly in vain, such as trying to get out of snowed in parking lot, or being at the end of a very long line for gas.
Just a suggestion, but the point is that the comparison between the fish he hooked and human qualities would be more plausible, less strained.
The steelhead is imbued with human characteristics such as "spirit", "courage" and "defiance", which indicates that the narrator his comparing his lot against that of the creature hooked on the line.

It's not far fetched to assume that the narrator assumes the fish to be in a state of shock, to be at the end of a line, on a hook, unable to breath, and that the empathy extends further to the irony of his own situation; a sophisticated person indulging in
primal activities where raw survival is the only matter at hand. In any regard, I think the implicit message is more of a package one deals with when they decide to write this kind of poem, which is to say that it's less Lucas doing the talking/musing than it is a fulfillment of genre expectation.

Which makes it frustrating because this poem almost works. A bit of indirection instead of a direct address of his idea might have given us a surprise instead of disappointed groan. Lucas's narrator is looking for a human quality when
the regret of winning the battle hits him. What it comes down to was that what he might have seen--Lucas is smart to hedge on his qualifications-- , whether courage, spirit, defiance, are intended as a Lesson. Lucas wants the lesson to be a military one; given the choice of qualities he tentatively assigned the Steelhead. All this is certainly implied, and it's worth bringing out.

I tried thinking of the poem as a lean metaphor for
invasion and defense of territories and to think of it as a critique, somewhat, of the current failure of American foreign policy, but that it became a labor-intensive riff as I worked on it. Sure, the elements are there in order to make the case, but I still think Lucas is wandering through Rousseau's neck of the woods and imagines himself in battle with an ennobled animal. Lucas is a good writer, but I'm not enamored of the mythology he wants to handle with a straight face here, unless, of course, he were willing to step several miles further than the conventional struggle/victory/winner's remorse scenario these pastoral situations must have and instead do something truly remarkable. There's a Paul Auster novel I can't remember the title to in which the point of view is the dog's who, credibly, is burdened with the task of finding a new master when it realizes his current one is dying. A remarkable read for a straight-forward novel.
at May 28, 2007