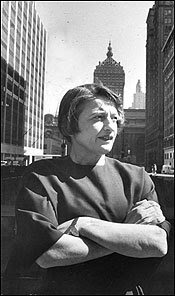 Feminism has made the demand that there be more strong women in this life and the next so that young females coming up will have living and legendary examples of those who've come before who've not allowed their gender to relegate to the back seat, the bench, the receptionist's desk while men profited from their labor and garnered the cash and the credit for all good things. Fine, well and good, and bully, one would say, and one is grateful for politics, the arts, the sciences being all that much keener, graceful, and interesting for the inclusion of brilliant women in prominent roles. Praise them all.

All? Strong women don't by default make for a feminist role model, certainly not in the case of ersatz novelist and circuitous thinker Ayn Rand; feminists are strangely silent about her. Who can blame them, Rand, guruette of the nascent libertarian movment in the Forties, has made a virtue of being a disquieting in a democracy , and for what she wrote about and promoted in fiction, plays and essays about the glories of genius worship, the evils of charity, the nefarious intent of The State in all matters, makes her an uncomfortable idea among those who think that government ought to be used to do the people's business. Less her godless conservatism makes her an unlikely choice for feminist admiration than it is her unabashed adoration of the male figure, within whom resides genius, power, drive, charisma. Rand in her real life affairs made the men in her circles wilt like dry lettuce, but in her fantasy life, it was the male who made things happen, who got things done, who blasted, belittled, bested, battered or raped anything that got in the way of his Will and his genius. Not a friend of the common gal, but certainly Larry Flynt's idea of dream date.

It seemed that Rand had an unseemly adoration for the idea of Ultimate masculinity, and that she was fairly well peeved by the fact that she was born a woman and had to distinguish herself from her gender fellows and their culture of girly things. She refused to believe that a woman, in life or in faction, can be strong, brilliant and assertive of her own accord: for that, she needed the dim wit Laurentian brutishness of her male heroes to turn her out, so that some sense of vital élan would invigorate her perceptions of the universe she could see only as a deluded, submissive play thing. She was a quintessential anti-feminist whose life and manner defined a feminist tact in a masculine world.

Rand wasn’t an intentional fascist, given her experience with the brutal stupidity of Soviet socialism, but it obvious that she was so take with the idea of the charismatic individual, the lone genius, as being the key to civilization’s advancement and preservation that winds up maintaining what it was she opposed.


Her heroes, we remember, are to be admired and followed and , by implication, obeyed without pause or debate. For an atheist, there is something religious in all this, in which the hero-genius will show us the means to achieve heaven-on-earth.
I suspect that a fascist agenda was at the secret heart of her dreadfully clogged thinking: she spoke of liberty and freedom, but her remarks returned time and again to the idea of "genius" and how about how society would be better off if the rabble just got out of the way of the work of the genius and allow them untrammeled, unregulated and unaccountable expression of their projects. The next step of the thinking was to allow the ill-defined geniuses to run things, to make policy, to smooth out the nettlesome complexities and demands of mass culture. Her agenda, I think, was to place everyone else in some place where they would stay out of the way of her and her genius buddies while they carved up the landscape erecting monuments to themselves.
Rand was not a fan of democracy.
Why on earth does anyone think that the following argument is somehow legitimate: "I used to like Rand, but I've grown out of her"?
Probably because the similarities between what passes as a literary art and a moral philosophy in Rand's dicey world view resembles a particular phase of growing up, the ages between 13-17, when a person is inordinately preoccupied with their own being, the issue of whether their desires or impulses are gratified at once or denied. Despite the grim world that made for this view, the substance of her argument romanticizes the worst attributes of children as being a sustainable, preferable state of existence: The Noble Brat.
Part of the intense self-awareness of the mindset is that no one, if any one, is up to the level of idea and perception as oneself, and the world would be a better fit for all on it if one only had ones' way, without interference or obligation to consider a greater consequence. Rand values self reliance and self determination, virtues held important in our political philosophy, but Rand, I think, had no use for democratic processes.
Her ideas are based on an abstracted impulse that the gratification of an ill-defined "genius" desire to unleash their will on the world handily assumes priority over the question of any kind of accountability. Howard Roark, I would think, would not have been bothered with building codes, given her perfect world. This is a dreamy thinking that cannot be trusted to even simple tasks.
It's a gross immaturity that Rand has made into a compelling argument whose intensity is meant to burn through strong counter views, though you can also say that her intensity, the absolute unwillingness to consider another view sans vilification comes to little more than sustained, albeit convoluted tantrum.
I enjoyed Rand's books, especially The Fountainhead, when I was in high school when it fitted my most intense years of self-involvement and juvenile foolishness, but luckily I had a personality that actually wanted to be around people because I valued a sense of community and ideas not my own: a stronger sense of a greater good in a generalized democratic framework seemed a more natural development , emotionally and intellectually, than the coarse outline Rand and her cement-cast prose offered on her best and sunniest day.
I grew out of Rand's egocentric rantings. I became an adult. I also read better novelists.
What do you think Rand would have made of Tim McVeigh?
Rand would call him a "patriot": from everything I've been able to discern from his statements, McVeigh, like Roark, thought the justness of cause so great that lives and property were of no consequence as long as the blow against the State and its' collectivizing institutions was forcefully delivered. Radians might argue that Roark took appear ant measures to ensure that no one was at the site before he destroyed his defiled housing project, but the psychology is the same, still.


Though professing freedom for all, Rand was effectively a social-Darwinist where a form of natural selection would winnow out less hardy member of the race --at least to the extent that they are socially neutralized from positions of power and influence--and leave the world to be administered and molded by her particular cadre of industrial geniuses and toadying technocrats. An exclusive club.

Marx was nominally against elitism and privilege, but he thought that the traits would vanish, made historically useless -- incapable of reproducing themselves as culturally cultivated habits -- only after a proper sequence in the dialectical mode of history had completed its violent transition. Seeing that man was capable of perceiving the precise set of economic and historical conditions that have made capitalism a seemingly entrenched and intractable force that virtually controlled the way the world is perceived, he thought it necessary to have an enlightened, committed few to dedicate their lives and their wills to the mobilizing of the masses: this was the work of a specific kind of person, and the thinking, perversely similar to those of Rands' final vision of her preferred social realm, was that it will take the few to lead the many to an ultimate End of History.

Marx’s' ideas of historical process, resulting ideally in a workers' paradise where humans are returned to their natural state, free of any constraints or concentrated power that exploits them, mirrors more than one set of religious mythology, unavoidable, perhaps, yet ironic given his insistence that his interpretation of history was the result of discovering "scientific laws." Only his "heaven" was earthly, and like End Days, the arrival of the revolution is always deferred, conditioned by some hazy "law" or condition that had yet to express itself in a manner conducive to a furthering of final justice. In the meantime, which is forever in Communist States, the select cadres who slowly marshal transition to a final withering away of the state remain in place. Intractable, elite. Until they're thrown out by oppressed populations who realize that they've no real use for the Stalins, or the Rands of history.


This is thinking that mistakes passionately expressed notions of how one wants the world to be with how the world actually is: its the tragic flow in this line of thought that assumes that big, loud, deadly gestures are only a symbolism that can wake every one else up to their erring ways and compel the population to a state of alert and vigilant correctness.
Charlie Manson thought much the same way when he and his tribe committed the Tate/LiBianca murders in the 60s, delusional thinking that this would start a revolution and race way after which Charlie and crew would emerge as the leaders of the new order.
Roark, with his thinking carried just a few paces further, would have been a McVeigh, leading more violent acts against anti-individualist institutions.
Rand seems to think that Roark wouldn't have a problem getting away with the outrages: in her fantasy, Roark admits crime, gives a glib summary of his world view, and is acquitted.


There is not a single line in any of her books that I know of that glorifies mass murder in any way, shape, or form.
Not mass murder, per se, but the fact that Howard Roark blows up a public housing project he designed in Fountainhead because his proprietary rights were trifled with by collectivist charity-mongers is a sure sign that she advocated violence of what she would rationalize as a "principled" sort it such acts can reveal the evil of government and all charitable schemes to an awakening world. The poor, whom this housing development would have benefited, are of no concern here.
Rand's interest in the novel are Roark's petty ego mania and how it's a perfectly rationale act for to utilize high powered explosives so he can feel good about itself. Following suit, I think she would have answered as I indicated had she been asked her opinion of McVeigh , his act, and his reasoning, albeit it's plausible that she might have chided him for being messier than he needed to. But I think she would have regarded him a great man, her kind of guy.