More from my record collection 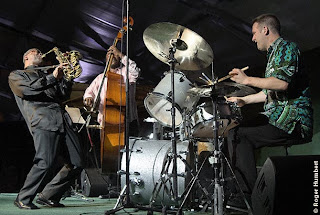 I've been clearing out old music these days, giving discs away, selling them, and playing a few I haven't heard for awhile. Here some of the one's I've kept:

I guess I've been in a straight ahead mood lately, catching up with CDs I haven't played much since I bought them. Garrett acquits himself here on his alto, and allows himself to mess with Coltrane's' sacred phrases: a potent abstractionist when need be, but a man who's outgrown the old clothes and demonstrates an inspired re-tailoring of the material. "Giant Steps" has a swaggering waltz feel, with a sly, side long reading of the head, and Garrett's' improvisations come in deft, spiky explosions. Metheny remains a marvel of jazz guitar here, a continuing revelation since he more or less walked away from his fusion stance some years ago, and the bass and drum interplay between Whitaker and Blade tumbles and rolls nicely through out.

Yes, yes, I am playing a desperate game of catch up, and habits tend toward stellar tributes rather than primary sources, but this Corea Bud Powell collection is notable for, besides dense and cutting improvisations, is the quality of Powells' compositions. Corea resists the temptation to Latinise or fusionize the material and instead plays the charts straight--Powells' sense of harmonic build up and resolution is loopy, easing from sweetness to tart dissonance. All of which is the canvas for some good blowing. Corea reins in his extravaganzas and weaves around with a now untypical sense of swing. The efforts of Garrett and Redman are a reed lovers idea of heaven. Roney has a cool, crystalline tone , and his phrasing is meditative, reserved, nicely so, though one desires a Freddie Hubbardish scorch at odd times. Haynes and McBride are champs.

A typical gathering of Hendrix loose threads, centered his outstanding blues guitar work: some tracks work better than others, the band is not always in tune , and sometimes drags terribly, but this is more than archival stuff for completest. "Red House" is included, always inspiring, and "Bleeding Heart", a truly mournful show blues work out that has only surfaced once or twice on some imports, has Hendrix digging deep into the frets. A live "Hear My Train A Comin'", originally on the "Rainbow Bridge" album, is a masterpiece of pure, blazing Hendrixism: Everything Hendrix could do right on the guitar is displayed here, the sonic flurries, the screaming ostinatos, the feedback waves that he turns into melodic textures with a snap of the whammy bar: this track ought to the one any Hendrix advocate plays as proof of the genius we speak about.

A 1961 gathering, a roll-up the sleeves where only the music mattered, from the sounds of things here. Gordon has such an easy gait on the slower, bluesier tunes, and an engulfing sense of swing on the faster tracks. And in between, any number of moods , his phrases whimsical, suggesting , perhaps, what Paul Desmond might have wished he sounded like if he would only dare step out of that glossy, modal style and burn a little. He might have garnered a bit of Gordon's humor. Billy Higgins is wonderful here, and Sonny Clark is a bright star through out: his chord work and harmonic turns brighten up the room.

Cranky post-Miles fusion, highlighting the tone-dialing bass work of Jackson, and pre-Living Color guitar work from Vernon Reid. Lessons from everywhere--bop and Zappa, Miles and Ornette--some of this does not hang together as well as it might, but some tracks mesh to fantastic results: particularly "Harlem Opera". Quizzical and cubist.


Jazz at the Hi-Hat --Sonny Stitt

Whether Stitt came up with this style on his own or did in fact cop from Charlie Parker is moot: this album, a 1954 live date with a strong band whose reputations are unknown to me, shows him playing as if he owned the style solely: the phrasing is fluid and ridiculously rapid, ebullient and melodic all through the melodies. Conventional fair, but pulsing bop, alive and kicking.


Superb selection of material--"Peaches and Regalia", "Twenty Small Cigars", "King Kong"--but you feel Palermo labored too hard to transcribe Zappa's music exactly. Still, the compositions stand tall, but the formalist air doesn't lighten. I kept wondering what it would have sounded like for Palermo to have a smaller band that substantially reworked Zappa's works, really messing with the moods, and extending. Maybe some one will see that through some day.


One of A Kind--Bill Bruford

The King Crimson and sometime Yes drummer had occasional jazz-fusion sessions when he wasn't furnishing beats behind abstruse angst fantasies, and surprisingly, the music holds up well. There is not an amphetamine strain fuzz tone anywhere to be heard. What helps are good tunes, most by Bruford, that mix up funk, Zappa, and Prog-rock stylistics under unmannered conditions, allowing the instrumental work to mesh, mess around, and burn as needed. Holdsworth offers some impressive ultra legato lines, and Jeff Berlin is singular on the bass. Bruford, hardly a Tony Williams-like goliath, fusion monster, lacks some the swing you might like, or even the blunt Bonham-oid pow! to make this rock harder, but he's an able timekeeper who keeps the session forging ahead.

Curious to see if the Blues Traveller leader might extend his unique harmonica playing to some styles that might render his speedy riffing into something consistently resembling music, but NOOOOOOOOOOOOOOOOOOOO. Twice, I count, he lets us know that he's a terribly fast player whose blurring cascades overwhelm you, but even on these tracks he becomes directionless, wheezing, void of an inspiration except perhaps to think that if he plays real fast , all the time, he might live up to the offensive comparisons of to Coltrane that have been made by more than one nitwit reviewer. Sugar Blue is your man, if you need rapid fire harmonica work. The songs? They sound like a man ploughing a field without a horse. Cumbersome at worse. At best, tuneful, but not often enough.
at April 10, 2007