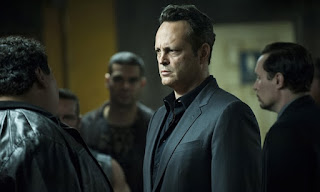 Jessica Reed writes a cogent defense of the second season of True Detective  in The Guardian, countering assertions of bad casting and performance, bad writing, misogyny and incoherence with clear arguments, clean examples. One understands that she "gets" the show and what creator and writer Nic Pizzolatto was aiming for with this gem of  a sentence from her article's fourth paragraph: "The message sent to us by the first episode’s final scene: we are entering a cursed place. Enter the world of Vinci, California, and you might never be able to escape its tentacles."

It would be interesting for someone to write a piece about the herd-think that has gone wild on the internet, arriving en masse to the lone talking point that TD2 is an "utter disaster". I was disappointed at first that the second season didn't seem more like the elegantly written and more typically "artful" style of the first, but I remained with the show and appreciated the differences. This was California noir, in the tradition of Hammett, Chandler, Jim Thompson, 'China Town", "Kiss Me Deadly", "Asphalt Jungle", a dark exposition and exploration into crime, treachery, divided loyalties, hidden agendas, political scandals, kidnapping, drugs, sex, lust, avarice, the whole gamut of twisted and tortuously rationalized actions. It's a tradition of complex storylines, where nearly everyone advances balled faced lies and put forth competing fictions to hide real motives and cruel truths. Often times the plots are as near to incoherent as one can go'; and such affairs rarely go quickly, at a pace more suitable for the stock action film. It's a slow build, a slow uncovering, where every lie that gets exposed reveals more treachery, hidden agendas, crimes committed in dark places.

The casting was spot on for what the characters were supposed to be. Vaughn, I think, nailed the terse, near expressionless crime boss who tried to be Hemingway stoic while the buried rage cracked his facade. He was not everyone's choice, but after the peculiarities in the attention grabbing gestures of Matt M. and Wood H. from last season, I was perfectly happy with the less articulate, subdued qualities of these characters.

And the dialogue, another aspect that's been bitched about to no end, was clearly a stylistic choice by writer Nick Pizzicato; the ostensible detectives uncovering the crimes through this mess are themselves broken and corrupted and here are attempting to do something resembling police work in order to bring  rough justice to those who deserve it. The truth, though, does not set you free, as the whole shebang becomes a ball of tar that has every vice stuck to it. I thought the bits of mumbled and muddled philosophy and wooden poeticism was effective in conveying the idea that the characters attempting to convey a sense of irony over recent events have little or no idea about what they're doing, what their goals are, or even where they stand as creatures with deeds to do, duties to perform. It was, I think, grossly under rated. It was mess, sure, but these kinds of stories are mood, not symmetry as it’s typically understood. It's a mess and it was beautiful, moody, nerve wracking and powerful

I liked the fact the show diverged from the creepy eloquence of the first season and instead placed us in a world of compounded noir particulars whose characters, good guys and bad guys, were not as well spoken as they thought they were. It was a moody eight episodes that had criminal conspiracies sprawling all over the landscape like Los Angeles county itself, and the fact that the investigators were a trio of cops with heavy baggage trying to decipher the thick over the layered sediment  of deception and corruption just made this fascinating for me.

Film noir is a genre famous for obtuse plots that are thick, hard to follow, at times bordering on incoherent; the point seems to be to expose and witness the peculiar rationalizations that motivated the crime, the larceny, and the paranoid self-seeking that forms the conditions for a bitterly ironic end for most of the involved.It was, in essence, of flawed characters who have made their various bargains with the devil attempting to escape their with the commision , they assume, of one virtuous act, the revelation of truth. No one, though, escapes their fate, and those who don't die find no redemption. It's a classic Tragic form, and TD2, provided an apt version of a thriller
at August 13, 2015