a belated blurb for a great Norman Mailer novel 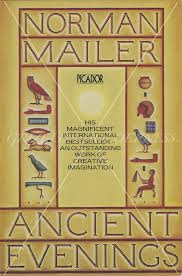 Mailer once remarked that his intention with writing Ancient Evenings was to compose a long sequence of novels telling the history of the Jewish people through the experience of one family, beginning in Ancient Egypt before the arrival of Christ, onward through time past various diasporas , persecutions, genocides, successes and setbacks, with the concluding edition of this fictional saga being somewhere in the future , in outer space, with the eyes of the protagonist trained outwards still. As it happens, Mailer was so engrossed in the profound mysteries of Egyptian religious ritual, culture and mythology that he never made past the river Nile. All the same, this is a breathtaking read, generations of magic, politics, reincarnations and aggressively ambiguous sexual engorgement roiling through centuries of particularized vanity. This is ,as others have correctly asserted, an overlong book , and one suspects that had Mailer been less known and an good editor had applied the blue pencil on those passages that were merely lugubrious , we would have had a tighter, punchier novel. But Ancient Evenings is one of those exotic expressions of unexpected genius that the passages that threaten to sink under the weight of all that sexual energy being put forth don't become tedium, but rather the texture of a fantastically realized fever dream; there are fantastic battles, eroticism beyond gender, magic in the ancient ways as men and women seek power and dominion over their own soles against mysterious and powerful forces that have placed them in impossible states of yearning.  This is a brilliant novel by a writer who , I believed, is one of the greatest novelists of the 20th century. That last assertion is a debate that won't be resolved here, but I do encourage anyone with a taste for ambitious historical fiction with a  skewed sense of the supernatural to read this book.