Louise Bogan burns down the barn

I was glad to read that  Louise Bogan remark that her poem, ‘Women”, was written when she was in her twenties and revealed what, she infers, is a not-unusual bitterness of intelligent young women feeling frustrated, restricted, defined and contained by her gender. Reading the poem, and listening to the audio kindly provided, it was a relief knowing in advance that her views of her own sex “had improved”. What Bogan provides is a sure and slashing blade of metaphor against women in general, for their willingness to participate in their own oppression.

“Women have no wilderness in them,
They are provident instead,
Content in the tight hot cell of their hearts
To eat dusty bread. … ” 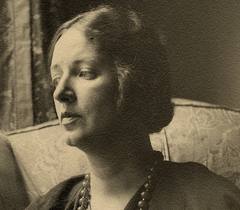 This is as an acute damnation as I’ve read, wickedly sharp, delivered in a masterfully sure stroke; there is an anger here that has sharpened her swing, The spare, cleanly delivered lines and uncluttered imagery reflect an irritation that has been mulled over and considered, pros and cons measured, the complaint reduced to a neatly consolidated statement to which response is difficult. Women have no fields in them, no inner sense of the world outside them, nor a curiosity of the lives that are outside their sphere of self-reference and gratification.
They are, rather, provident, little else but skeletal abstractions of consciousness unto which the ideas of others, by implication the doings of men of industry, political where with all and sexual domination, are grafted upon, seeded upon, constantly turned over as the musings and distractions of Masters change at the slightest whim. Bogan’s judgment is severe and short-sighted as to the extent women allow men to define, contain and direct their lives, but this is an account of someone who, though perhaps too close to the contentiously emotional heart of the issue has, ironically, learned her lesson from Master Hemingway, delivering with relish a superbly honed rhetoric that condemns a self-induced stultification of her gender. Rather than take the plow and make use of the field for their own desires and pursuits, she finds her sisters

“They wait, when they should turn to journeys,
They stiffen, when they should bend.
They use against themselves that benevolence
To which no man is friend.
They cannot think of so many crops to a field
Or of clean wood cleft by an axe.
Their love is an eager meaningless…”

They wait for the muse not to come them, like their own idea, hunch or inspiration, but instead to be given to them, like school uniforms and a script to follow. They are consumed with fear, the fear of a loss of security and someone else’s idea of their worth, creating a collective anxiety that converts the collective anger about the oppression into self – hatred, self-debasement. The poet sees this clearly and what Bogan does is present images that imply nothing else but a serial sacrifice of personal ambition, desire, and potential.
The inner life of women, this poem, is barren, there is no wilderness to conquer and define in one’s own image, women exist merely as an adjunct quirk of the collective male psychology, a means to gratify an odious male end. Bogan’s poem, years after the heat and convulsions of the blended Civil Rights movements–blacks, women, gays–has subsided and whose goals and values have lodged, to a degree at least, in the mainstream of the culture, this poem remains a potent polemic. It is political without didacticism, it is philosophical without abstraction. It has a direct language that finds profundity in the absence of profound sounding words. It is a poem of a near-perfect craft. This is not craft at the sacrifice of emotional power, though; the ire has the sting of a bad memory as the narrator announces her grievances about the seductive fallacy of women making themselves lesser than men.I was just entertaining the idea of adding more to my post here, emphasizing that what Bogan has done is create craftsmanship without sacrificing the heart of the matter, her heart, her feelings. I find the poem wholly convincing as felt experience; the resentment is palpable.

So many poems, particularly those of the New Formalists, are flawless in their structure and technique but lacking in emotional resonance or even give any idea that the poet knew what it was he or she wanted to talk about. The points in that kind of poetic origami are minor at best, outlines of an experience otherwise sacrificed on the altar of technique. Bogan does not vanish from the poem, her voice is there–I would that her speech in the poem, her cadence, is that of someone who, while angry, wants to make a declaration that is clear, articulate, and understood, in a spare language that is accurate. It is a fire that continues to burn and still ignites passion, debates, discomfort in the reader, from then to the current day. Her accomplishment is that her craft turned into her irritation into an accurate diagnosis that has not lost its relevance. That is not an easy thing to get across.
at August 03, 2018