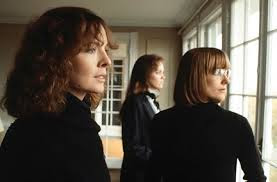 Woody Allen's new film "Blue Jasmine" has been getting some of the best notices  for the director's late-areer efforts, a fact that justifies, perhaps, a reexamination of some of his other less fondly remembered, less discussed films. Allen, more than any American film maker, deserves a retrospective. Slate has argued that Interiors, his first straight on drama , no comedy, and a stylistic tribute to his hero Ingmar Bergman, actually rises above its reputation as a stiff and shallow presentation of depressed , well read white folks and is , indeed, a serious, inspired drama. Reading the article convinced that there are indeed nuanced themes that course through the decades of films Allen has written and directed since the  60s, and that growth from being an inspired slap stick comic with a library card to a more verbal, nuanced, cerebral film maker leads inevitably to a film like" Interiors".

Still, I don't think it's anything near Allen's best work. In this case, the general consensus I read among long time Allen fans is correct, that the movie is a paceless, stationary    bore. The irony is that Woody Allen has done inspired parodies of other film directors through out his professional life and his mitigated his penchant  for genre tributes with a Burlesque crudeness,a low wit , that kept him from taking himself so seriously. At the end of the day it could be said that "Interiors" succeeds in being Allen's parody masterpiece,  mimicry and mockery  so dead on target that you mistake it for being the real article; it would more credible to argue that Allen's real intention with this film was comedy of the most subtle and perverse type, that which imitates the pervading , saddening stylistics of Bergman's  movie introspection to an obsessive degree, producing an effect of unreality, a critical distance that prevents the audience from engaging characters who really comprehend the psychology that motivates the shuffling movement.

This leaves the audience in a bewildering state of nagging "what the hell?", wondering if they should laugh or be moved by what they've seen. The joke , of course, would be the theories film goers would construct to make sense of the time they spent in the dark, growing listless, watching actors stare past one another. Even if this were the case, I prefer the simpler explanation: "Interiors"  was an important  transitional film for Allen to make, but that does not remove the fact that is a dull  transition that fortunately led to better work to follow.
at August 29, 2013